One of Carmarthenshire’s principal towns, Ammanford was once the heartland of the mining community in West Wales. ‘Following the Seam’, a 6-metre-high sandstone sculpture by Howard Bowcott, stands in the town centre as a tribute to the area’s contribution to the coal industry. Ammanford is the base to explore the Amman Valley.

The town’s name comes from the ford that was once used to cross the River Amman. Today you can cross the river at the same point using a footpath and cycleway.

The town means a lot to entrepreneur and TV personality, Ameer Rhys Davies-Rana. We asked him to tell us more about the town. Read on to find out more.

Ameer is well known as a presenter on Welsh speaking television. He also runs a successful events business, promoting the use of Welsh to schools.

He acknowledges that, in the past, Ammanford may not have been at the top of list of places to visit for visitors to the county. But he feels they are missing out and that time spent in this authentically Welsh, former mining town, is well worth the trip.

Firstly, Ammanford is easy to get to. Just off the M4 and close to all parts of the county, Ameer light-heartedly proclaims it to be the “Centre of Wales”.

Hunt for the Twrch Trwyth

Ameer points out that on the approach to Ammanford, you’ll spot sculptures of a boar and two piglets. The boar’s image also appears on the crests for Ammanford Town Council and both its football and rugby clubs. But what’s the significance of this animal to the town?

The boar is known locally as ‘Y Twrch Trwyth’ (The Enchanted Boar) and is the subject of Arthurian legend. The story goes that Culhwch, having fallen in love with Olwen, is sent on a quest by her evil giant of a father in order to win her hand in marriage. One of his tasks is to recover a magical comb, scissors and razor from between the ears of the Twrch Trwyth. Having chased him and his seven piglets out of Ireland, Culhwch, Arthur and his army catch up with the Twrch Trwyth in what is known today as the Amman Valley, and they manage to kill five piglets before the boar flees again. 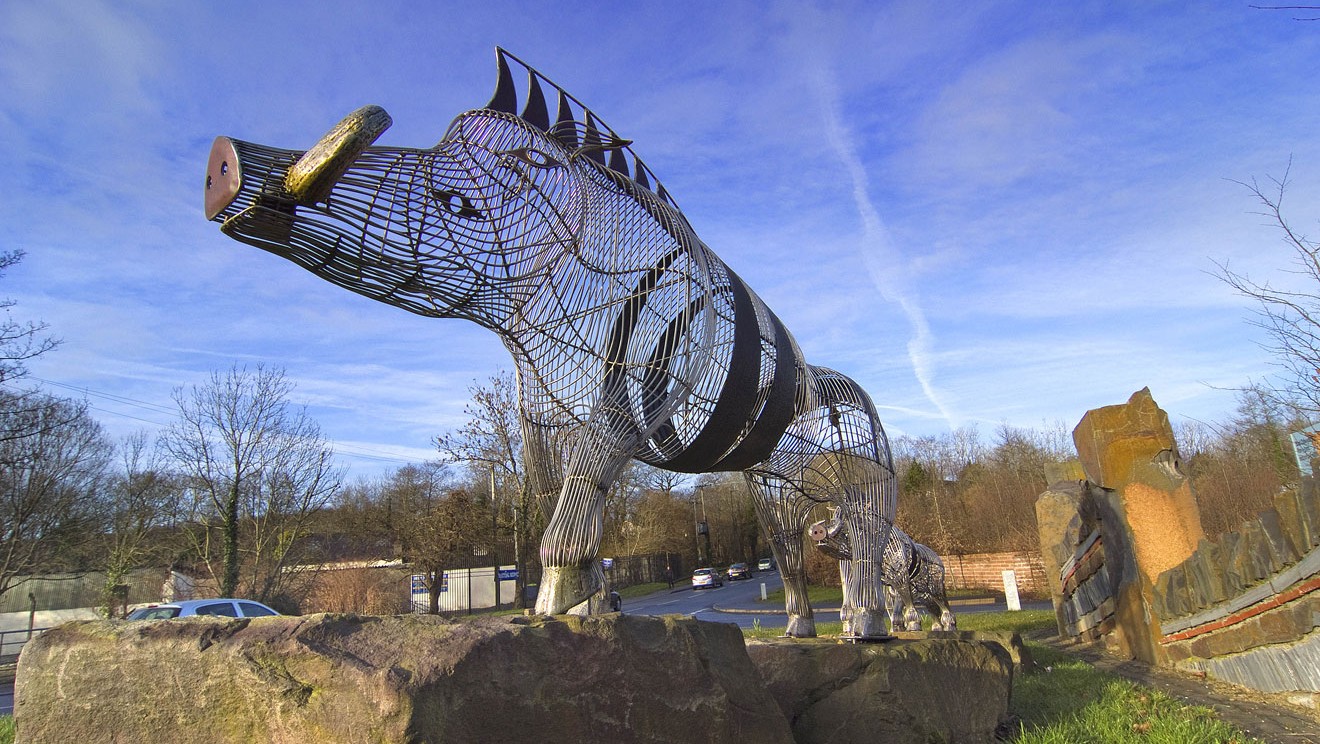 Shoppers can explore Ammanford’s handsome Victorian Arcade. Browse the works of local authors at College Street Books, then enjoy a quiet read with a coffee and crepe at Vive la Crepe. For genuine Welsh mementoes, head to Cyfoes on Quay Street for quality clothing, homeware, crafts and gifts. Ammanford is also an official Fairtrade town; keep an eye out for Fairtrade products around the town. One of Ameer’s favourite places for a bite to eat is the Windsor Café. This family-run, true Welsh “chippy” on Quay St has a great reputation with the people of Ammanford – the faggot and peas pie sounds very tempting.

Ameer says that, in the evening town draws visitors form all over the county. He says that the cluster of pubs and bars on Wind Street now gives the homonymous street in Swansea city centre “a run for its money”. There are plenty of watering holes to choose from, but Ameer says that if visitors are seeking an authentic Welsh Valleys night out, perhaps they should head for the Ammanford Miners Welfare Social Club. 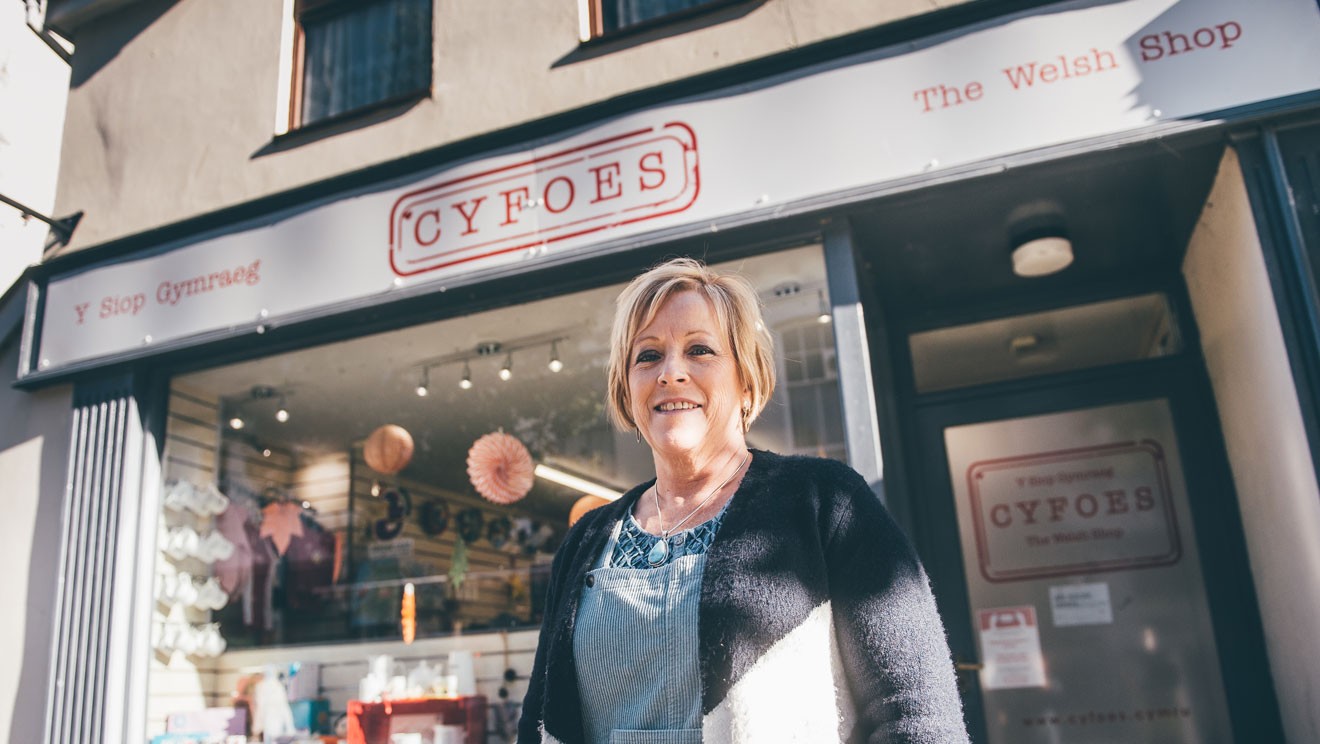 There are other, perhaps surprising links, to Ammanford’s mining heritage. The town that was once famous for its original black gold – coal – is now producing a new version: coffee. Head to Coaltown Coffee, located on the edge of town, for a cup of their award-winning, sustainable coffee. All Coaltown’s coffee is roasted and packed by local people at their roastery. 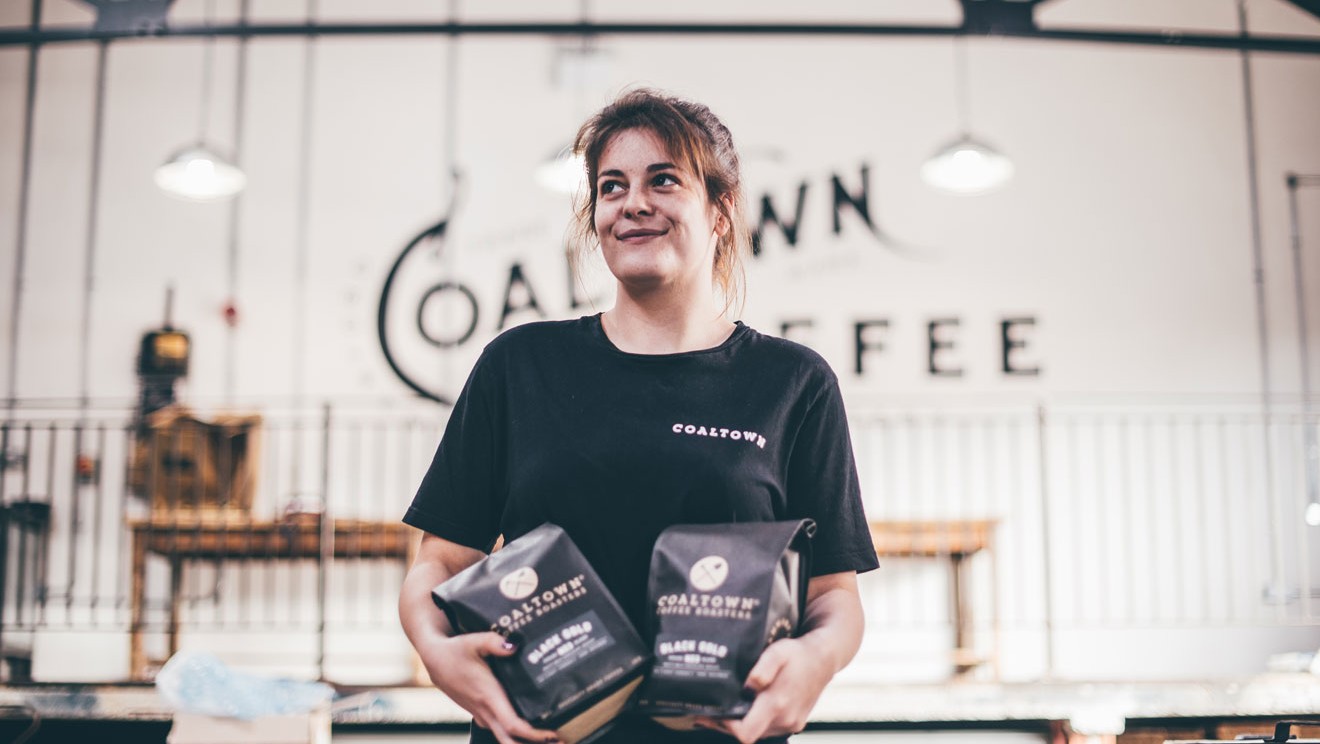 Down by the riverside

For cyclists and walkers, Ameer mentions the 9-kilometre (6-mile) route between Ammanford and Upper Brynamman follows the River Amman. Popular with both walkers and cyclists, the route passes through woodlands, leafy lanes and parkland. Most of the villages of the Amman Valley owe their expansion to the discovery and exploitation of coal and iron ore locally. Today, however there are few signs of this industrial past left and the sites and spoil heaps have been reclaimed by nature. The river and its banks are important habitats for waterbirds such as mergansers, mallards, kingfishers and wagtails. Overhead, you might spot buzzards and, if you’re lucky, the occasional red kite. 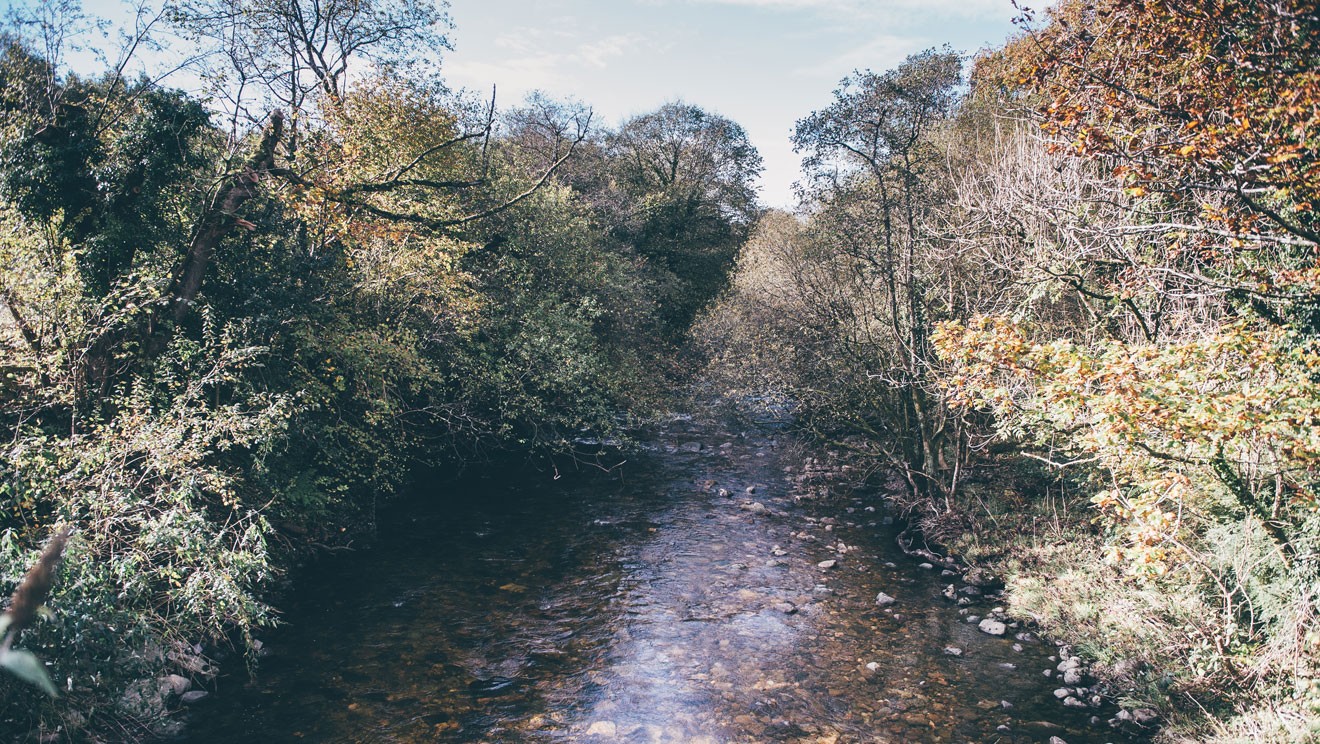 The Black Mountain Quarries, known locally as Herbert’s Quarry, is found in the Fforest Fawr UNESCO Global Geopark, on the western fringes of the Brecon Beacons. The site is a time capsule of a significant era in the area’s industrial heritage. You’ll find physical traces of lime exploitation spanning hundreds of years with quarry workings, kilns and spoil heaps that date from the small-scale exploitation during the 1700s right through to commercial exploitation in the 20th century. On clear days, you’ll also experience panoramic views west to Pembrokeshire, south to the Bristol Channel and north to Pumlumon, in the Cambrian Mountains. 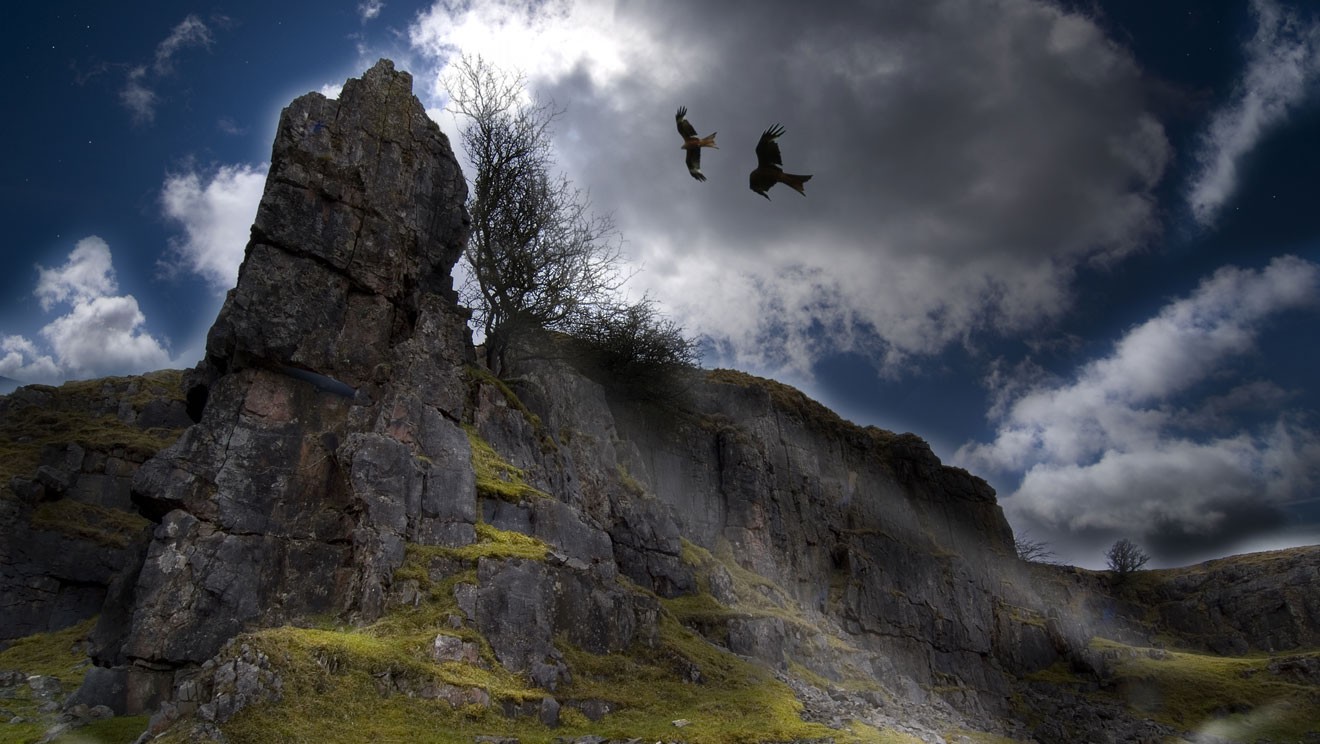 Nope, we’re not suggesting you steal a car during your visit. But, drive the A4069 Black Mountain Pass and it’s likely to cause a sudden onset of euphoria. The route is more commonly known as ‘the Top Gear road’, after Jeremy Clarkson was filmed driving it back in 2011. It’s since become a firm favourite with car magazine writers, bikers and performance car fans – and unsurprisingly, mobile speed cameras (consider yourself warned). From a driving perspective, it’s best tackled from north to south – the hairpin bend known as ‘Tro Gwcw’ (Cuckoo Turn) is particularly memorable. For non-petrolheads, the stunning views of the Tywi Valley are best enjoyed travelling in the opposite direction. Another drive, which happens to be Ameer’s favourite, is the road up to Mynydd y Bettws. The route offers panoramic views of Ammanford (Ameer suggests this as the best photo stop) before crossing into the Swansea Valley 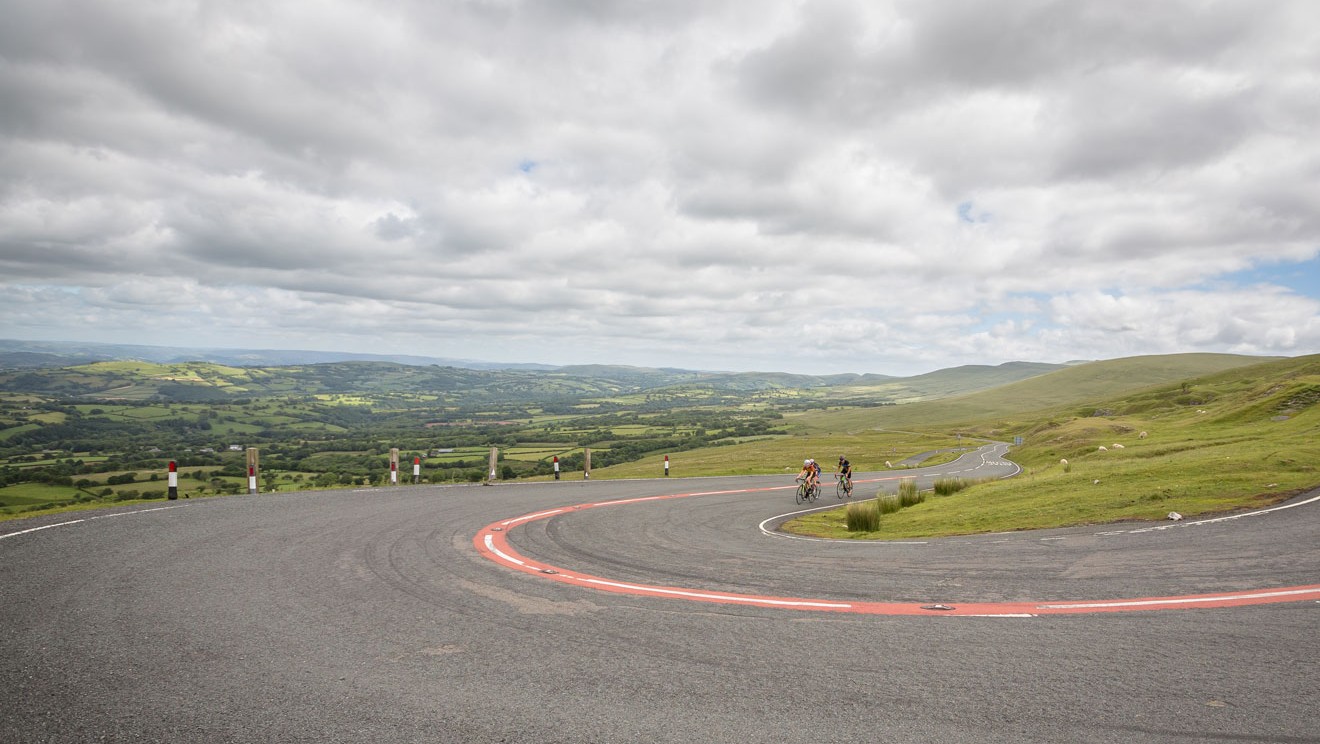 Carmel National Nature Reserve, close to the village of Carmel, is built around a massive former limestone quarry. Depending on the season you visit, you’ll get a very different experience. In spring, the woodland is full of bluebells and the air scented with the aroma of wild garlic. The reserve is home to the only turlough (seasonal lake) in Britain. Fed solely by groundwater, Pant y Llyn fills in late autumn, reaching depths of up to 3 metres in winter. However, the lake dries up and vanishes completely come summertime. 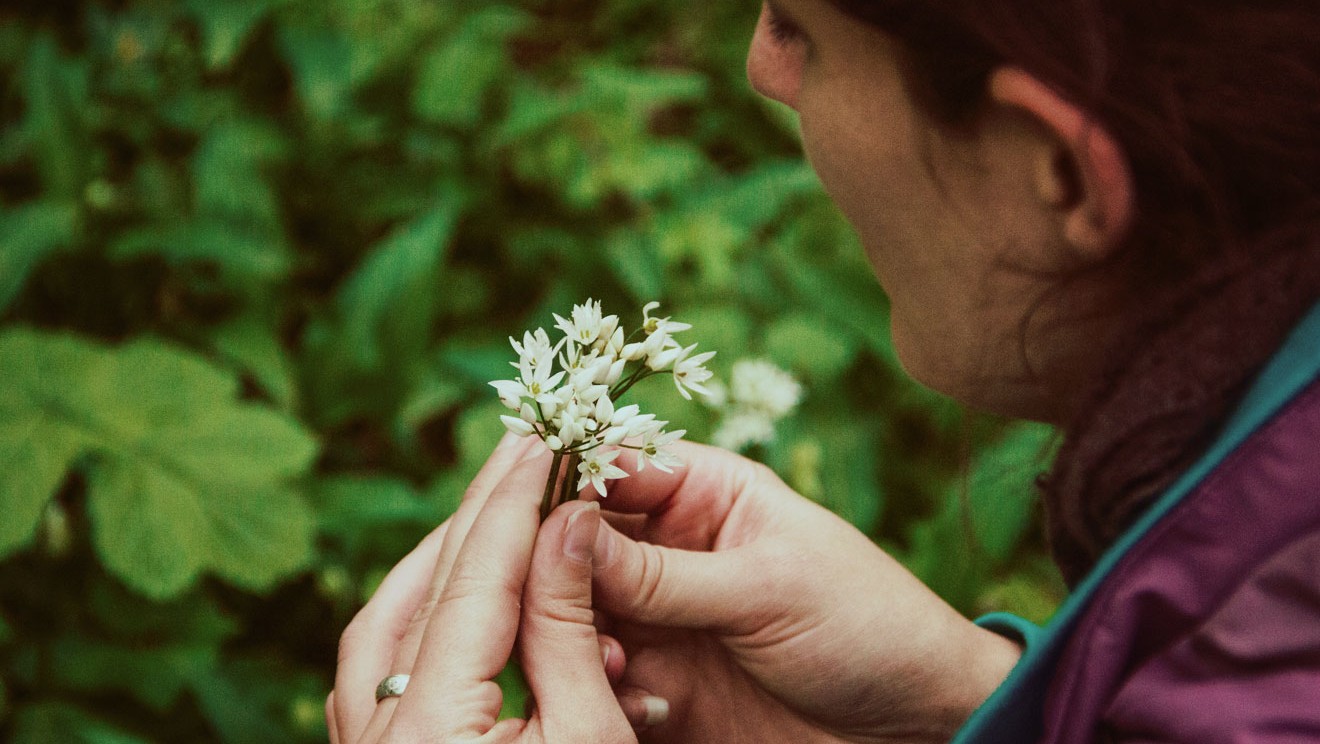 Ameer is well known as a presenter on Welsh speaking television. He also runs a successful events business, promoting the use of Welsh to schools.

The Instagram Spot – The view back to Ammanford from the Bettws Mountain.

The Surprising Fact – Ammanford is great for an authentic Welsh night out.

His Personal Favourite – The Windsor Cafe