Follow the Whitland Abbey byway walking route from Whitland town centre up to the historic Whitland Abbey, which was the Mother Abbey for the Cistercians in Wales. Excellent for dog walkers or leisurely exercise.

The walk is just under 5km.

Starting point: For this walk you can either start at the car park in North road or at TH Hywel DDa Interpretation centre

Points of Interest along the walk

1. Just opposite Dyffryn Taf school is the house where the world famous composer William Mathias was born. He created an anthem for the wedding of Prince Charles to Lady Diana Spencer. Look out for the plaque.

2. You will be walking parallel to the Roman road, Via Julia, which was part excavated when the 1996 By-pass was constructed. This route was used by Pilgrims and Cattle Drovers in Centuries past.

3. There are orchids, bluebells, lovely views and birdsong. In the woodland an old hidden ruin called Golden Gate cottage is said to be the exit of the tunnel from the Abbey Mansion.

4. Nothing can be seen today but this is the site of a former Golden Gate which held religious significance for pilgrims and it is thought the act of walking through the gate symbolised spiritual renewal.

6. On the left are the ruins of the Abbey kitchens and monks living quarters now held in private ownership. Turning left at the Abbey road, after 50m, is the site of the ruined Abbey Church open to the public. C.1140

7.Return back to the Abbey road heading south. Pass the gothic Abbey Mansion on your left. Spot the unusual winged creatures on the gates of the Abbey Mansion. C.1847

8. Continue over the River Gronw bridge and notice the old stone stiles alongside. After approx. 150m there is a small public footpath “kissing gate” in the hedgerow on the right hand side.

9. Turn right downhill. Pass the Fishers pub and over the River Gronw and then past the Primary school. 100m past the Primary school turn right through large black gates into Parc Dr Owen. The Parc was given to the people of Whitland by Dr Owens family over half a century past and is maintained by the funds raised in the annual carnival.

10. Notable is a stone monolith erected in memory of local character Dr George Penn. A concrete path leads up to the WWI Memorial Garden where there is a lovely view south and west from the seat. The sound of the River Gronw can be heard here. The big blue heritage seat was designed by local blacksmith Mr Peterson. The nine featured themes were inspired by children and reflect local culture.

11. King Hywel Dda was famous for Welsh law making and codified the laws at Whitland circa 940AD at the old white house on the River Taf. There are dedicated interpretive gardens in the Town Centre. 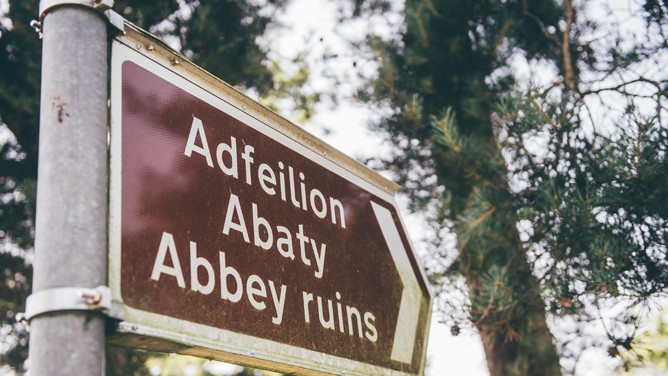 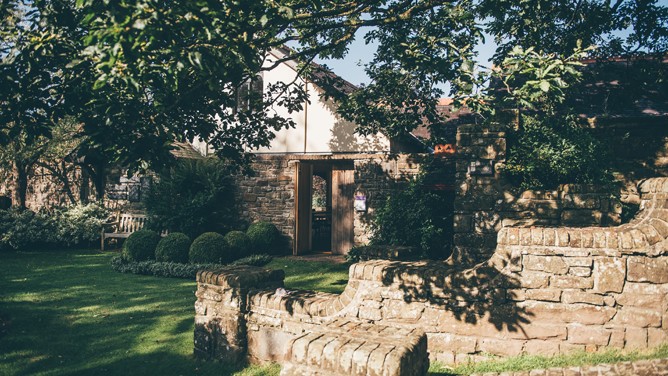