Llangadog stands in the fertile Towy valley, one of the most pleasant landscapes in Carmarthenshire. To the east, the traditional common lands on the hills of the Carmarthenshire Fans still form extensive open moorland, full of archaeological evidence of earlier societies. Large Bronze Age burial mounds dot the horizon, built over 3,000 years ago, and the ancient forts of Celtic warrior chieftains, occupied over 2,000 years ago, sit atop several local hills. The Towy has been an important communications route since prehistoric times, and a Roman road runs along the western side of the valley, opposite Llangadog.

According to tradition, the Celtic saint Cadog founded a church and monastery here during the 6th century. During the 12th and 13th centuries, this part of the Towy valley was at the heart of the lands controlled by the princes of Deheubarth from their stronghold at Dinefwr Castle (near Llandeilo). Many bloody battles were fought during these centuries as the Welsh princes sought, often with great success, to stem the advance of the Anglo-Norman invaders. The castles built during this dramatic period can still be seen along the Towy valley, with perhaps one of the finest examples of a motte and bailey castle still surviving near Llangadog.

In the late 13th century, Llangadog and its lands were given to the Bishop of St David’s, and a small borough town was established. By the 16th century, a weekly market and seven annual fairs were held here. Neighbouring Felindre Sawdde, in contrast, developed under the control of the Lordship of Llandovery, and by the 14th century had its own annual fair and market. During more recent times, Llangadog has served as a busy market centre for a wide rural area, and it retains the atmosphere of an important 19th century market town. Both walks offer picturesque views of the Tywi Valley and the Brecon Beacons. The walks have both wildlife and historical interest.

How Long?
The short circular walk around the village is 3.3Km long (2.1 miles).
The longer walk into the wider countryside is 10.5Km (6.5 miles)

How Hard?
Both routes are valley routes and are both over reasonably level, or undulating, rather than steep ground, with a few steps and stiles to deal with along the way. The fields and woodland sections can be marshy in places after rain so stout footwear is recommended.

Starting point - A good starting point with adequate parking is by the roadside crossing the common land near to the bridge over the Sawdde river.

1. It is worth spending a few moments by the bridge over the Sawdde river to take in the view. In summer you are likely to see Pied Wagtail searching for insects amongst the pebbles, while Swallows, Sand Martins and Swifts reel overhead displaying their astonishing aerial acrobatics. A patient or lucky passer-by may even see Sandpipers, Dipper or Kingfisher.

2. Carreg Sawdde common has been unenclosed grazing land since the 13th century when the Bishop of St David’s gave the burgesses of Llangadog grazing rights here. In medieval times, Felindre, to the south of the common, was an estate of the Lordship of Llandovery, with its own court and annual fair. The field pattern to the west of the village may represent former medieval strip fields.

3. In 1858 the Llanelly Railway and Dock Company opened the railway line from Llandeilo to Llandovery as the Vale of Towy Line. The line is now part of the Heart of Wales Line running from Swansea to Shrewsbury.

4. Glansevin corn mill was part of the Glansevin estate, where estate tenants were required to bring their corn for milling.

5. The footpath passes the former coach house of Glansevin Mansion, once the seat of the Lloyd family, now converted to holiday accommodation. In 1670 it was assessed for tax purposes as having eight hearths, making it one of the largest houses in the area. The family left the house at the beginning of the 20th century, returning temporarily to provide accommodation for evacuees during World War Two.

6. The pathway through Coed Cae’r Bedw was traditionally known to older inhabitants as Heol y Beddau or “the road of the graves”. Low mounds visible in the early 20th century were said to be the burial places of warriors who had died of plague.

7. Castell Meurig is a wonderful example of a medieval motte and bailey castle. A modern house stands within its bailey. The footpath gives walkers an unrivalled view of the bank of the bailey and the tree-covered motte beyond. Prince Maelgwyn ap Rhys captured the castle from the Normans using “catapults and sling” in 1203, after which it appears to have been disused. Local tradition says that there was once a stone tower on the motte.

8. In summer Wild Thyme grows beneath the hedgerow, attracting a variety of insect life. Its purple flowers prove particularly attractive to Burnet Moths. Honeysuckle flowers scent the summer air along with the delicate white flowers of the Field Rose. 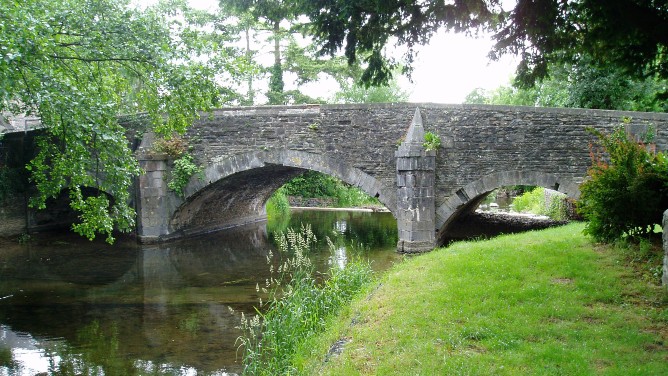 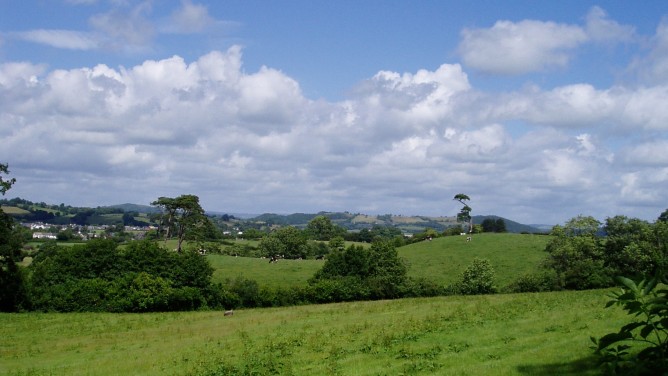 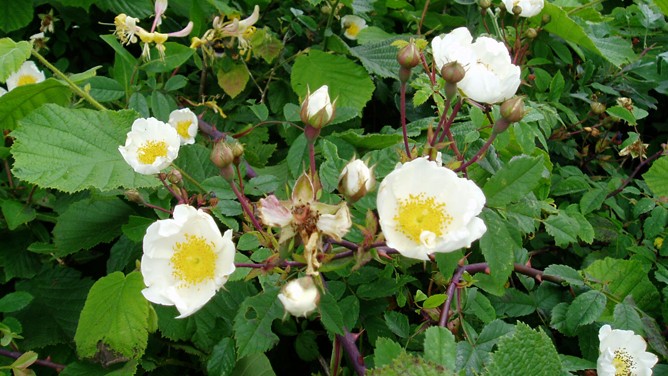