The village of Ferryside is situated almost at the centre of the Carmarthen Bay Coastline and close to the where three of Carmarthenshire’s main rivers enter the sea, the Taf, the Gwendraeth and the Towy.

As its name implies, Ferryside was an important crossing point on the river Towy providing a short cut for local people, traders, and pilgrims travelling west towards St David’s and Pembrokeshire.

Settlements in the Parish of St Ishmael’s

The parish contains three main settlements today – one lost village below the sand dunes, one old village and one new village. There is a lost village partly exposed along the foreshore beneath the railway line at Salmon Scar. Undoubtedly the village was St Ishmael itself, with only the parish church remaining. The most likely event causing it to disappear are the colossal storms and floods of 1606. Shifting sand-dunes and changes to the foreshore flooded and buried the village, most of which still must lie beneath the stabilised sand-dunes now crossed by the railway.

Then there is the old hilltop village of Llansaint. It probably grew up around an early Christian cemetery, within which a church was later built. There are traces around Llansaint of former medieval ‘openfields’, in the shape of narrow, enclosed, strip fields – sure sign of a large medieval village.

And finally there is the present-day village of Ferryside. This has grown up around an ancient route – and a new one. The old route is the Ferry across to Llansteffan, from which the settlement takes its name. The new one is the Great Western railway built by Isambard Kingdom Brunel and opened in 1852. At first the rails were laid directly onto the shingle, to Brunel’s broad gauge. A sea defence had to be constructed to protect the line and it was rebuilt upon an embankment. Ferryside continued to develop as a fishing village, a ‘watering place’ and a place for genteel retirement.

1. The mudflats and saltmarshes in the bay are an important site for thousands of overwintering waders such as Knot, Sanderling and Godwits. Redshanks and Oyster Catchers can be seen in smaller numbers throughout the year along with Herons and Shellduck.

2. The village Primary School was established in 1856 by Church Commissioners and continues to serve the local community.

3. The “Cliff path” is a part of the 870 mile (1,400Km) long Wales Coastal Path that runs from Queens Ferry in the North to Chepstow in the south.

4. Superb views of the Coastal strip and across Carmarthen bay to Llansteffan village and its Norman Castle, built within the earthworks of a much earlier Iron Age hillfort.

5. The hilltop village of Llansaint has a maze of narrow roads that focus on the church. Inscribed stones of the 5th or 6th century, built into the fabric of the church, can still be seen. They are gravestones for two individuals, Vennisettl and Cimesetl who may have been local chieftains of Irish descent.

6. Tregoning Hill was given to the National Trust by the Tregoning family who originally came from Cornwall. Their wealth came from the tinplate works in Llanelli.

7. Across the railway and onto the foreshore are the stones of Salmon Scar, with the remnants of a lost village exposed at low tide 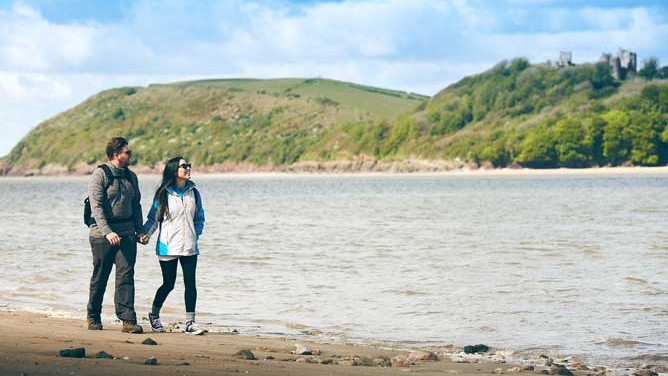 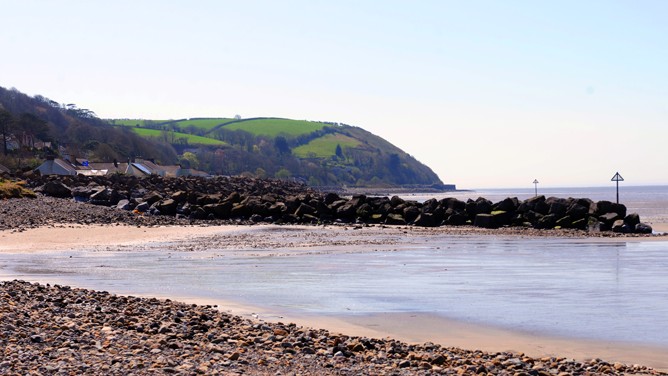