In the early middle ages the areas north of the Cothi were heavily wooded, used for fuel, building materials, hunting and as a source of honey and nuts.

To the Norman kings and their Marcher lords attempting to subdue Wales from the 11th century onwards, these forests represented a formidable barrier to the armoured, mounted knight. Following the final subjugation of Wales by Edward I in 1283, Glyncothi became a Royal Forest.

The village is the birthplace of Thomas Evans, known as ‘Thomas Glyn Cothi’ (1764–1833), an influential minister in the Unitarian Church who was imprisoned for his radical views supporting the French Revolution and the abolition of the slave trade.

During the First World War a factory in the village utilised local timber to manufacture naphtha, used in the making of explosives.

Two camps were set up by the Ministry of Labour in the 1930s, at Treglog (NE of Abergorlech) and just south of Brechfa village, these were used between March and October to house unemployed workers from the South Wales Valleys during the Depression, to build Forestry roads. They also provided a home for Basque refugee children from the Spanish Civil War and during WWII were used to house Poles. One of the forest roads is known as the Burma Road, built by hand in wartime. 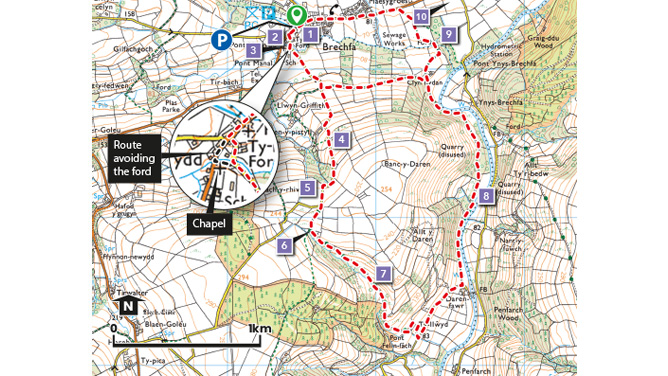 Why Walk?
The route starts from Brechfa, a small charming village in the heart of Carmarthenshire. This is a quiet rural area of the County with steep sided and wooded river valleys. The route follows quiet country lanes and old byways leading to ancient Oak woodland and flower rich meadows. An especially delightful section of the walk follows the river Cothi, one of south Wales most beautiful rivers.

How Long?
The long circular route shown on the map is approx. 6.5 Km long (4 miles) with 230 Metres of ascent. (Allow three and a half hours).
The short circular walk is approx. 2.6 Km (1.5 miles) over relatively level ground (allow an hour and a half).

How Hard?
The long route has some steep sections and both walks follow rough tracks and cross fields that may be wet underfoot even in summer. NB. In Brechfa the route crosses a ford, which is often too deep for walkers. An alternative permissive route uses the track alongside the chapel; shown on the map. 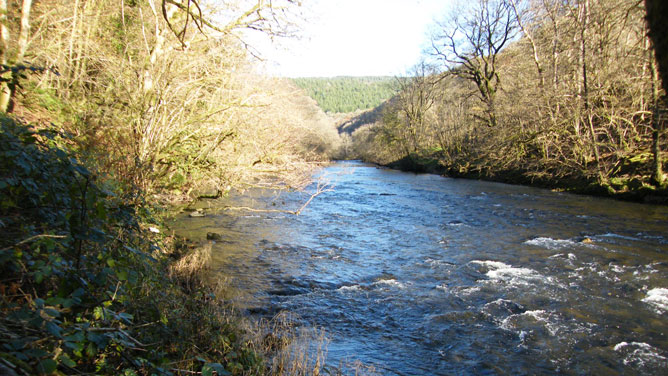 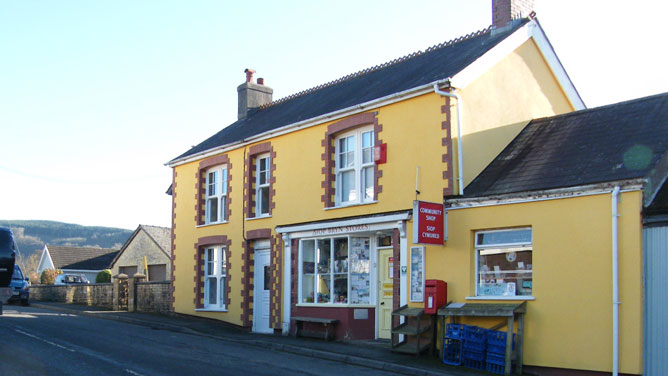 1. Brechfa parish equates to a medieval monastic grange that belonged to Talley Abbey. It is mentioned in 11th/12th Century documents in the so-called ‘Book of Llandaff’ as ‘Bracma’.

2. The Forest Arms Inn in Brechfa takes its name from the nearby former mansion house of Fforest.

3. Brechfa’s Calvinistic Methodist Chapel was built in 1790 to a simple, basic design. The minister from Soar, Cilycwm first came here to preach and establish the cause in about 1770.

4. The high hedge-banks are covered with Wood Anemone and Celandine in Spring, Hart’s Tongue Fern and Wood Sage later in the year.

5. Fforest mansion, situated on the opposite (north) side of the valley was built in 1724 by the Rudds of Aberglasney. It still retains its Jacobean staircase and earlier Tudor windows. Its tree lined drive can be made out from this vantage point.

6. Hafod ruin. In 1844 Hafod consisted only of the house and a few fields. The house itself can best be described as a ‘longhouse’ and the name Hafod suggests a much older origin. It means summer dwelling and may go back to a period when Banc-y-Daren itself was unenclosed open upland – rough grazing for sheep and cattle. The Hafod may have been the summer residence of a shepherd or cowherd.

7. A Byway, giving a sense of what many roads used to be like before modern surfacing. It was shown as a through-road on the first edition Ordnance Survey one-inch map of 1831.

8. The walk alongside the River Cothi passes through native woodland of Oak, Ash and Hazel. This is a relaxing place to linger to spot woodland and river birds such as Tree Creepers, Woodpeckers, Merganser and Mallards.

9. Area of wet grassland with many marsh-loving plants such as Meadow Sweet, Bog Asphodel, Spotted Orchids and wild Angelica.

10.Ffynnon Byrgwm picnic area and car park only 2.5 Km (1.5 miles) east of Brechfa - gives access to an extensive area of woodland, open to the public for walking, horse riding and mountain biking. The woodland is an interesting mix of conifer plantation and native hardwood forest. Look out for Red Squirrels and many different birds including Goldcrests, Nuthatches, Red Kites and Crossbills. 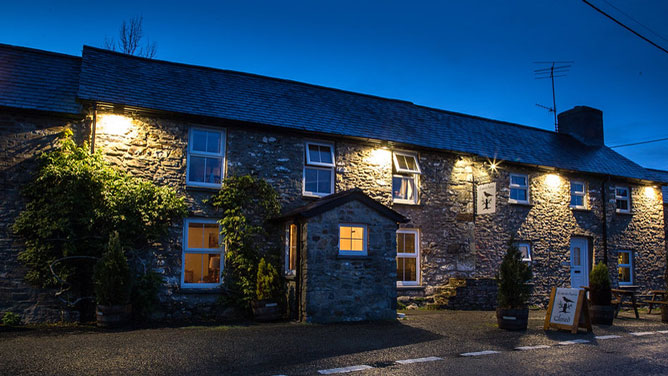 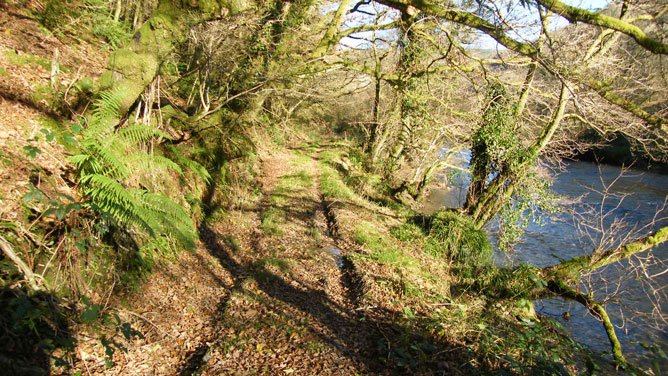 Walk along the River Cothi