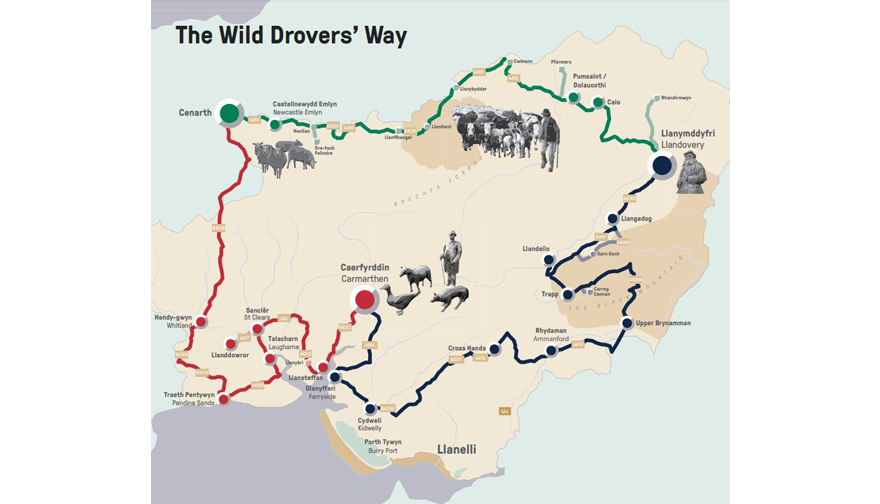 > Explore the county’s rural back roads
> Follow in the footsteps of the drovers from as far back as the Middle Ages
> Divided into three sections which can be enjoyed separately for shorter breaks
> The names Lnanwenog, Black Ox and Balwen taken from Welsh animal breeds
> Take it slow. Best leave 3 to 4 days to explore the whole route
> Download The Wild Drovers' Way leaflet (pdf)

Heiptro Ho! The Wild Drovers’ Way is a scenic circular touring route of the ‘lazy lanes’ of Carmarthenshire exploring over 180 miles of the county’s rural back roads, just as the drovers did from as far back as the Middle Ages.

Today’s travellers won’t have sheep, pigs or geese to herd but they will enjoy the same warm hospitality as they drive through valleys and cross mountains, from market town to market town unlocking the heritage of this real slice of Welsh Wales.

The green lanes and winding country roads of Carmarthenshire are no longer thronged by the drovers and their mooing, honking wards – the mid-19th-century advent of the railways put paid to that traffic – however the region is still studded with reminders of the old ways.

Timeless country pubs and coaching inns, stone animal pounds, tollhouses and smithies where cattle were shod with metal ‘cues’ or ciws all afford glimpses of Carmarthenshire’s droving past.

Discover these evocative sights and many other historic nuggets – including some of the country’s most atmospheric and picturesque castles following the Wild Drovers’ Way, a new 180-mile driving route tracing a circuit around the county.

Along undulating backroads, this scenic tour takes in the county’s colourful towns and comely villages, welcoming pubs and bustling markets. And it reveals the county’s most glorious vistas, sweeping across mountains, valleys and coves. There’s also a far few detours recommended along tiny lanes which reward with even less-well-known vistas and historic insights.

The Wild Drovers’ Way is a journey deep into the heart of real Carmarthenshire. This is slow travel at its finest, and can’t be hurried – so allow at least three or four days or more to absorb the finest scenery and sights. 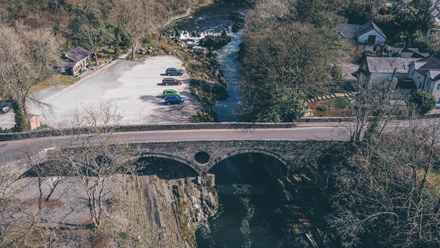 > Peruse local arts and crafts at the art galleries and independent shops on Kings Street in Carmarthen's Old Quarter.

> Walk up to Llansteffan castle and take in the breath-taking view.

>Be sure to take a look at the ironwork on the bridge in St. Clears, relating to the Twrch Trwth, made by blacksmith-artist David Petersen.

> Follow in the footsteps of Dylan Thomas in Laugharne.

>On a summer's weekend take your car on to the beach at Pendine sands.

> Strike a pose on the picture perfect stone bridge over Cenarth Falls.

> Enjoy a tranquil moment at the Hywel Dda Garden and Interpretive Centre to give an insight into the remarkable laws that were passed here over a thousand years ago. 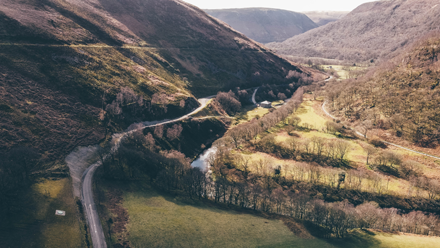 >During September and October, spot the salmon leaping upstream at Cenarth Falls.

>Enjoy a stroll and a picnic along the river at Newcastle Emlyn, a great place for stone skimming and a paddle.

>Follow the process from Fleece to Fabric at the National Wool Museum.

>For a few moments in a peaceful setting and a maze which children will love, follow signs for the little church of Llanfihangel Rhos-y-corn.

>Try your luck at panning for gold at Dolaucothi Gold Mines.

>The magnificent unspoilt beauty spots and the amazing wildlife in places such as Rhandir-mwyn and Dinas-Gwenffrwd RSPB reserve at Ystrad-ffin, where the young Tywi rushes by. 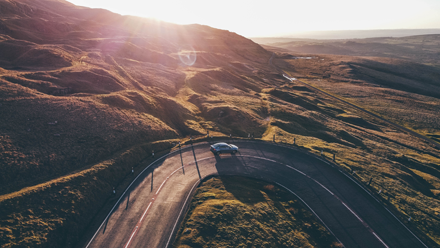 >Look out for the fine King’s Head building in Llandovery, where the Black Ox Bank was first opened in 1799.

>Park on Llangadog common near the river Sawdde for a walk or picnic. The common has been unenclosed grazing since the 13th century.

>Ffair-fach, named after the fairs held there – and if you visit on the last Saturday of every month you will see just how busy the livestock market is even today.

>Climb up and survey the view at Carreg Cennen Castle; photographers and artists love this moody fortress on its mighty crag.

>Drop in at the Black Mountain Centre, Brynaman, you can see an exhibition and enjoy a cuppa.