Just off the A40, at the western edge of Carmarthenshire and beside the border with Pembrokeshire, lies the town of Whitland. The A40 links the port of Fishguard – a key ferry terminal for Ireland - with the metropolis of London (it starts at St Paul’s Cathedral) so it’s been an important route linking Britain’s capital with Ireland for many years.

These days travellers from all over Europe still travel the A40 as they head to Fishguard before onward journey to Ireland. But Whitland shouldn’t be bypassed.

It’s also on the main railway line to the ferry ports and visitors by rail change trains here before heading to the coastal resorts. Many choose to take the opportunity to take a stroll around the town. They find a busy place, which boasts a fascinating history and is well worth a visit.

We asked Colin Harries, the owner of the London House Butchery and Deli, to tell us more about his town. Read on to find out what he said.

On entering the London House Butchery and Deli, visitors find a store full of beautifully presented meats, food and drink, the majority of which are sourced close by. The sourdough bread from local artisan micro bakery Rock & Dough tastes as good as it smells and looks. As you would expect the meat is reared locally. Perhaps less expected is the range of locally produced drinks. Try the Still Wild Extra Dry Vermouth made from botanicals and locally foraged thyme and dulce, amongst other things! We also love the local gin, Jin Talog handcrafted in a cowshed on a farm in Talog to the north of Whitland. The nano-distillery shares farm space with Banwen sheep – a rare mountain breed native to Carmarthenshire – as well as geese pigs and hens. Colin tells us that Whitland is most famous for its connections with Welsh king Hywel Dda or Howell the Good. At one time Hywel ruled most of Wales. He is best remembered for the Laws of Hywel Dda which set out an early legal system based on traditional Welsh rules. Hywel gets his name because the laws were seen as just and good, with an emphasis was on compassion rather than punishment.

The Laws were created in Whitland. Hywel convened a gathering of Welsh leaders and legal experts from all over Wales to Ty Gwyn-ar-daf – the “white house on the River Taf.” This is where modern Whitland gets its name from. Hywel’s immense contribution to Wales is celebrated at the Hywel Dda Centre and Gardens, located in the heart of the town. Here, you will find an interpretive centre which tells Hywel’s story and a collection of gardens which focus on different aspects of Hywel’s Laws. For example, the Willow Garden focuses on how the laws protected women’s rights. And the Garden of all the Trees reveals Hywel’s laws aimed at strengthening community. In many ways Hywel’s Laws were visionary. There is, of course, a more famous White House, and there may be a connection between the building in Washington DC and the one where Hywel’s Laws were written. Five of the first six US Presidents had Welsh heritage. This includes John Adams, the second President and the first to occupy the White House. Adams’ grandfather came from nearby Llanboidy, near Whitland, and it is he who gave the President’s residence the nickname of “White House.” Many believe this was inspired by an earlier seat of government in Wales many centuries before. This story inspired Steve Moody to buy an award-winning restaurant near Whitland. The Jabajak Vineyard Restaurant and Vineyard is located close to Llanboidy on the edge of the Preseli Mountains. Jabajak offers seasonally fresh and locally sourced food, much of it grown in their own kitchen garden. Steve and his wife moved to Carmarthenshire from the New Forest, where they ran a successful asset finance broking business. But the lure of working and living in this wonderful corner of Wales persuaded them to head west.

The main Jabajak building makes a credible case to be the original White House. In fact, the wine label at the Jabajak vineyard is called “The White House” and if you take one of the excellent tasting tours on offer, you can find out why.

Jabajak is one of three vineyards boosting the wine-making reputation of Whitland. Visitors in search of wines with real Welsh provenance will be spoilt for choice. Close to Jabajaks is Hebron Vineyard. Here the vines are cultivated with very low/zero intervention and are organically maintained. The owners, Jemma and Paul, learned their viticulture skills in Andalucía. Their sparkling white “Silver Lining” is making wine buyers and tasters sit up and take notice. It has also earned PGI status which reflects the wines authenticity and quality. Strictly, Velfrey Vineyard is just over the county border in Pembrokeshire, but it is very much part of Whitland’s growing wine making reputation. Another drink more traditionally linked with Whitland is milk. It was once the home of a major creamery. This heritage is reflected at nearby Pen Back Farm. Here, the Cowshed offers visitors the delightful mix of woodfired pizza, and Cowpots sumptuous ice cream. Why not try the ice cream in a one of their famous Cowshakes? Pen Back Farm is one of many around Whitland, and at the J Williams and Sons Farm Shop you can buy produce from many of them such as Fforest Farm Milk, Ty Gwennol Oat Milk, and Swn y Coed Salad. This is also the place where you can buy handmade Carmarthenshire bread from Hafod Bakery. To appreciate the lushness of the countryside, and to learn more about the town’s history, take a walk. The Whitland Abbey Byway Walk is possibly the best to combine nature and heritage. On this route you will follow in the footsteps of pilgrim’s and drovers and see ponds once fished by Cistercian monks. You will also pass the place where composer William Mathias lived. He wrote an anthem for the marriage Princess Diana and the Prince Charles. The focal point of the walk is the ruins of Whitland Abbey, dubbed the Mother House of Welsh Cistercians. 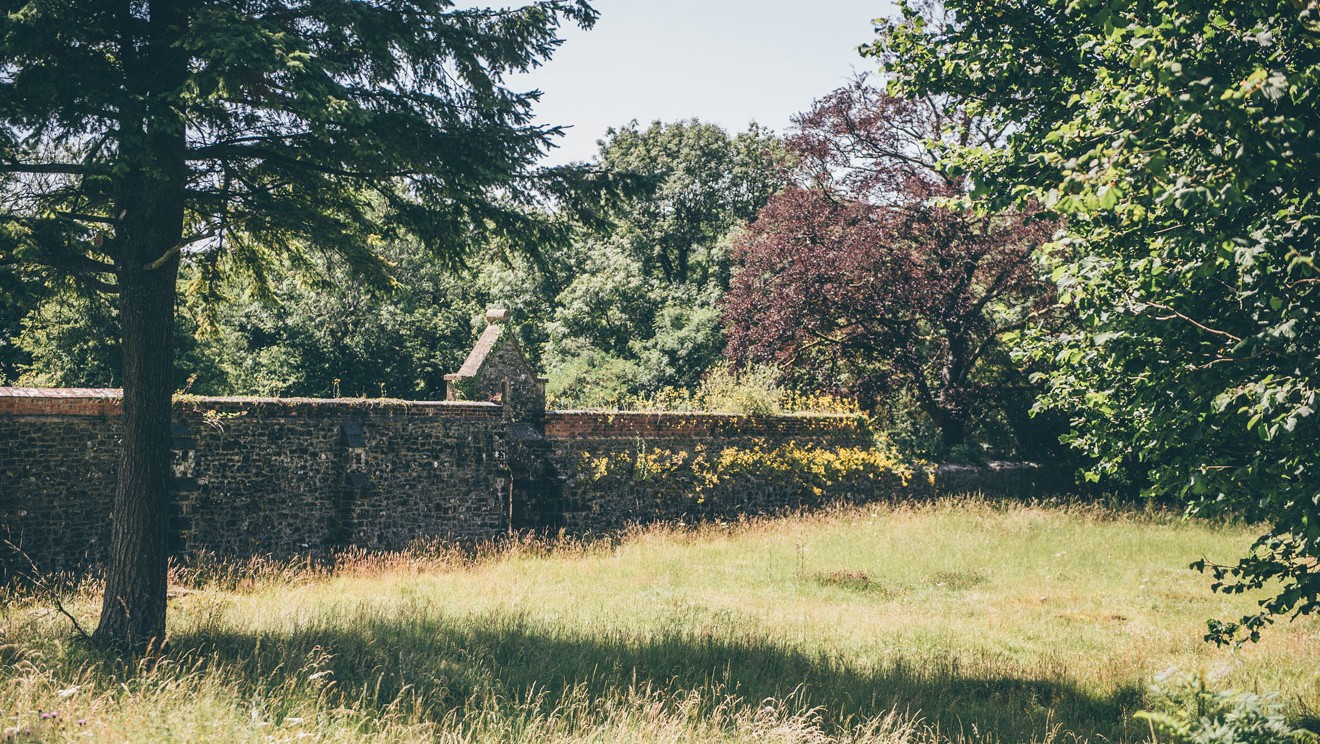 No doubt after the walk you’ll need refreshment. If you took your dogs, you’ll find a warm dog-friendly welcome as well as wholesome pub-grub and real ales at the Station House. Another traditional pub, The Fishers is famed for its Sunday lunch. If it’s just tea, coffee or snack you fancy then The Coffee Lounge is a great choice. Roadhouse is a family run restaurant and another worthwhile pit-stop for coffee and a slice of cake or a family meal. 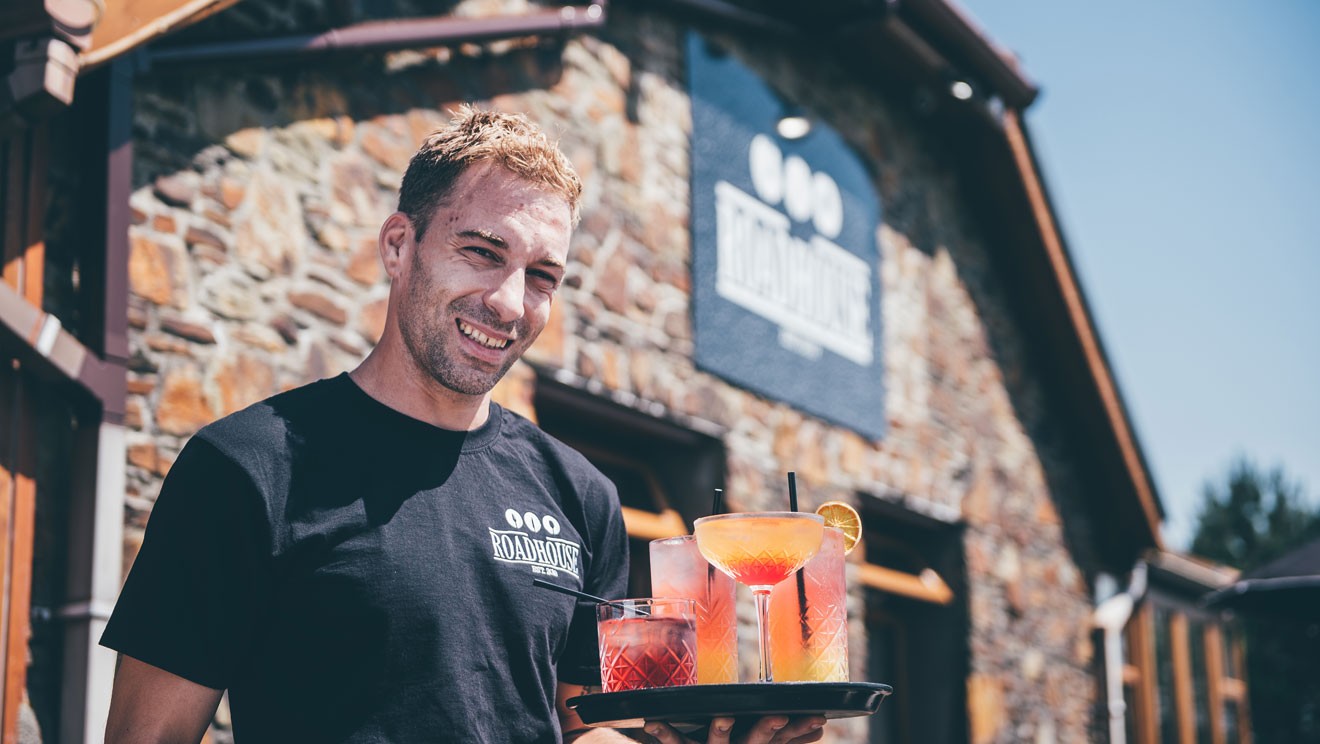 Colin is Whitland born and bred. He has been in the butchery business since leaving school and bought the business from the former owner in the late 1980s. Having travelled to study how meat was sold in markets and shops in other countries, he came up with the vision of establishing a European style deli alongside the traditional butchers. Today the London House Butchery and Deli is a thriving business and an important part of the local community.

The “Must Do” for Visitors – Visit the Hywel Dda heritage centre and gardens.

The Surprising Story – Whitland’s connections with the White House in Washington DC.

Personal Favourite – Enjoy a Cowpot from Pen Back Farm 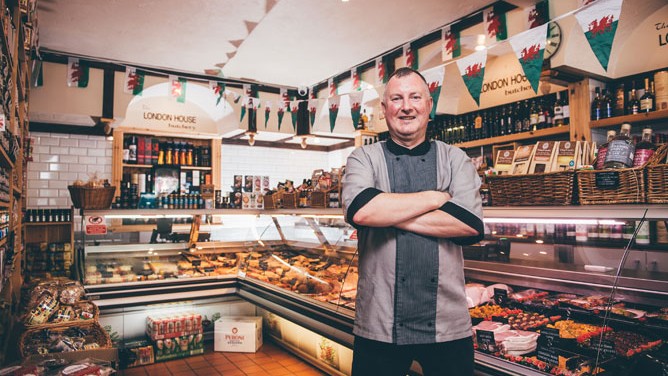