In the northeast of the county is the market town of Llandovery. It lies close to the Brecon Beacons National Park and is a gateway to the astounding beauty of the Cambrian Mountains. It sits on the banks of the River Tywi, where the A40 meets the A483. With a population of around 2,700, it’s small in size but big on appeal, and is one the Carmarthenshire country towns attracting increasing numbers of visitors.

Here, you’ll find a place rich in history and culture with plenty to see and do in and around the town.

We asked Rhodri Gomer Davies to tell us more about the town he knows so well. This is what he told us.

Former professional rugby player Rhodri is well known in these parts as a rugby TV pundit and presenter. He grew up just north of Llandovery in the village of Ffarmers. Like many young boys in this part of Wales, he loved rugby and his talent earned him a scholarship at Llandovery College. Many famous Welsh internationals are Old Llandoverians including British Lions captain Alun Wyn Jones. As a keen cyclist and walker, Llandovery was a great place to study for Rhodri. His favourite cycle-route is the climb up the close-by Black Mountain, which is no surprise as it is rated one of top 100 in Britain

Following all those outdoor exertions, refreshment is needed, and Rhodri tells us that, Llandovery once had more inns per head than anywhere else. This plethora of pubs results from the towns heritage as a drovers town. It’s thought that there were over 100 in the town during the 1700s. Many remain to this day, and because this is farming country you can now enjoy locally sourced fayre along with the craft ales.

The Castle Hotel is a good example. It combines rustic charm and characterful interiors with modern, fresh ideas for food and drink. Rhodri says it would be quite remiss to come to a Llandovery and not sample a delicious Drover’s Lunch including ham hock terrine, Welsh cheddar and Scotch egg. If you prefer cider to beer, Rhodri mentions the Whitehall. It dates from the 17th century, and you’ll find Gwynt y Ddraig Happy Daze on handpump. The streets of Llandovery are full of places to shop as well as places to eat and drink.

Mathews Butchers is the place for locally sourced meats. Their home cured bacon is perfect for a Welsh breakfast. You would be keeping good company - Mathews are purveyors of meat and poultry to the royal household. Close to the butchers is the bakers, La Patisserie offers freshly baked bread, cakes, scones and doughnuts.

The nearby Penygawse Tea Rooms is a favourite with locals and visitors alike. Here, the welcome is as warm as their famous toasted panini's. Enjoy the triple cooked chips and the tiffin, though it’s best not to have them together! 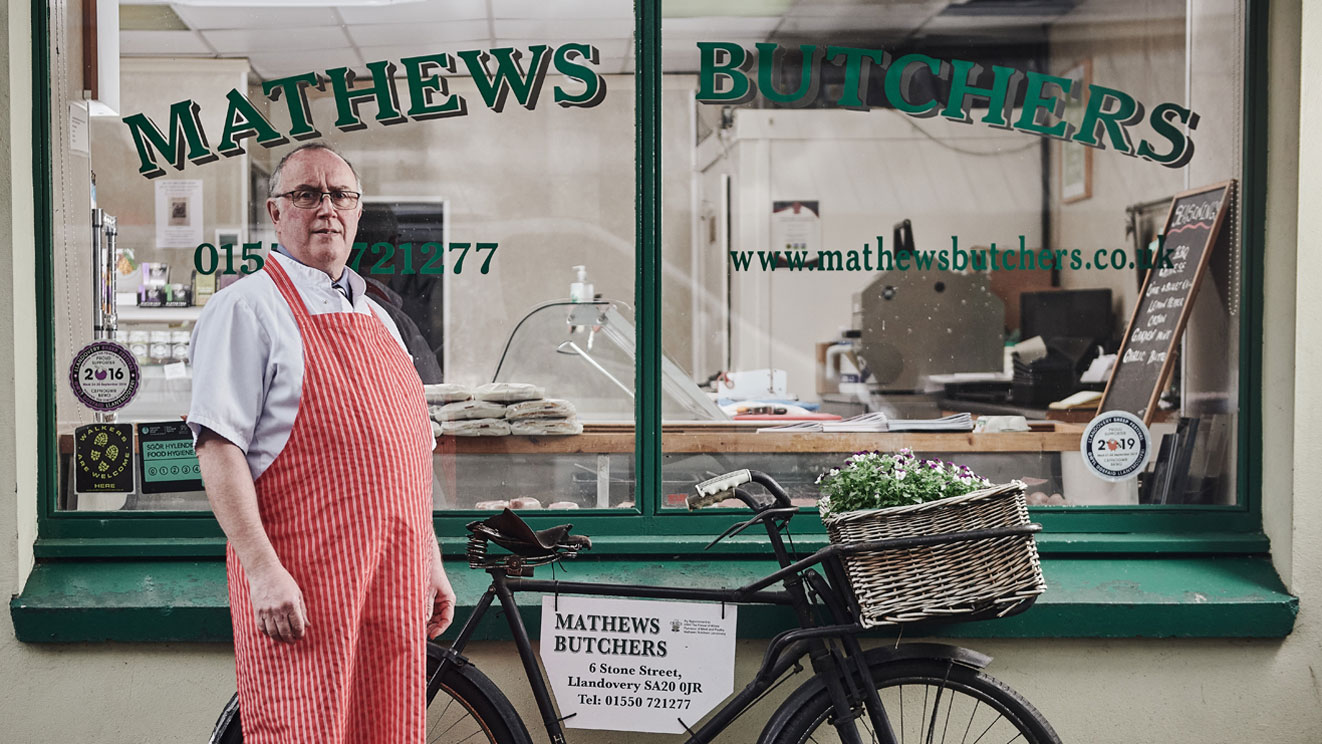 Around every corner you’ll discover connections to the drovers heritage. Stone Street was the site of Banc yr Eidion Du (Bank of the Black Ox). Established in 1799 by David Jones, the bank issued its own notes featuring the black ox emblem. They acted as a form of payment for the drovers, but were completely worthless to any highwaymen, thieves or pirates that might want to relieve them of their takings.

The statue of a drover behind a bench close to the Llandovery Museum and Visitor Gateway, is a great photo opportunity – bet you’ve never been photo bombed by a drover before! Rhodri suggests that the stainless-steel statue of Welsh hero, Llywelyn ap Gruffydd Fychan is most instagrammable spot in town. 5 metres high, this 21st century icon stands proudly alongside the ruins of the 12th-century castle. It was unveiled in 2001, almost 600 years to the day since he was hung, drawn and quartered in the town’s square by Henry IV in 1401, as punishment for his support of Welsh prince Owain Glyndŵr.

In the pubs you may hear stories of other local legends such Twm Siôn Cati, a Welsh Robin Hood who roamed the area in the 16th century. Rhodri also told us about the fabled “Physicians of Myddfai”. These 12th-century physicians were herbalists who developed a collection of medicinal remedies in the nearby village. This seems very appropriate for an area increasingly seen as place to escape the stresses and strains of modern life. There probably isn’t a child - or grown-up, for that matter – that wouldn’t like a go at panning for gold. That’s one of the experiences on offer at Dolaucothi Gold Mines, located in the beautiful Cothi Valley, a 20-minute drive from Llandovery. The Romans began the search for the precious metal here 2,000 years ago, carving out hillsides and diverting rivers to find it. Mining continued here until 1938. Guided tours will take you back in time to experience the harsh conditions underground in the Roman and Victorian workings. 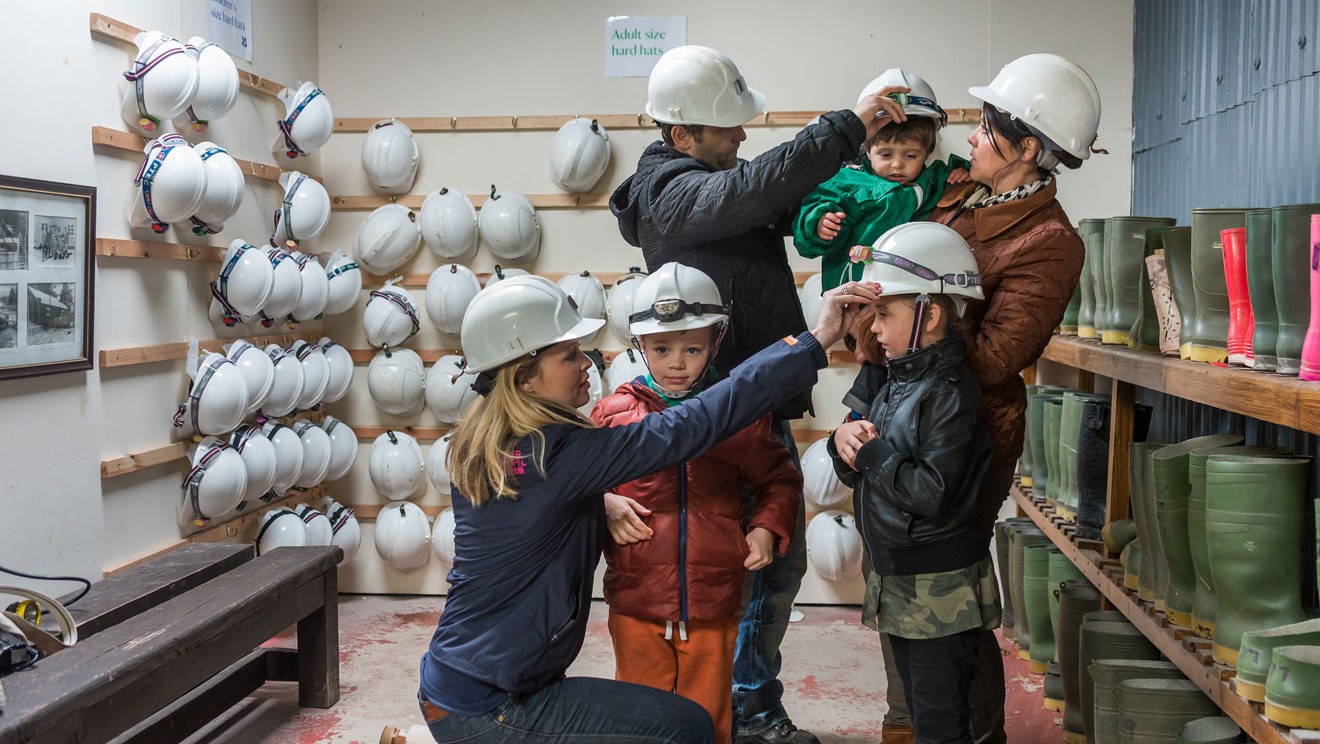 Former professional rugby player Rhodri is well known in these parts as a rugby TV pundit and presenter. He grew up just north of Llandovery in the village of Ffarmers. Like many young boys in this part of Wales, he loved rugby and his talent earned him a scholarship at Llandovery College. As a keen cyclist and walker, Llandovery was a great place to study for Rhodri. His favourite cycle-route is the climb up the close-by Black Mountain, which is no surprise as it is rated one of top 100 in Britain.

Like many local farmers Rhodri is now part of the growing tourism sector. With his wife Carys, he runs Gelli Glamping further down the Tywi Valley.

The Best Cycle Route – The climb up the nearby black mountain.

The “Must Do” for Visitors – Try a Drovers Lunch.

The Photo Stop – The statue of Llywelyn ap Gruffydd Fychan.

The Local Legend – The Physicians of Myddfai. 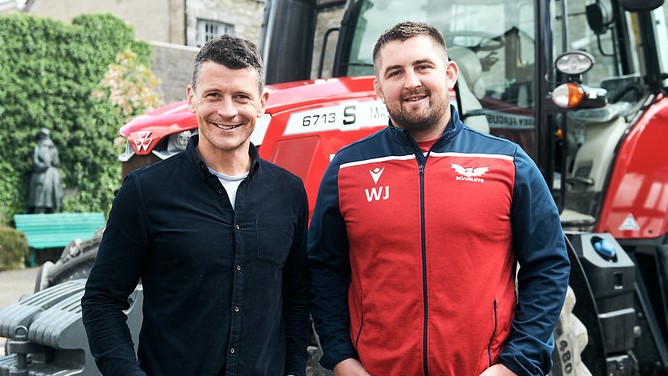 Stay in Llandovery & the Brecon Beacons