From the A477, brown signs for Dylan Thomas Boathouse guide you along beautiful country roads to Laugharne. It’s located on the coast, set in a delightful location on the estuary where the River Taf flows into Carmarthen Bay. Laugharne is, perhaps, most famously associated with Welsh poet Dylan Thomas. Dylan lived in Laugharne from 1949 until his death in 1953. He once famously described the town as “a timeless, mild, beguiling island of a town”.

Most believe that Laugharne is the inspiration for the fictional town of “Llaregub” in Dylan’s iconic piece “Under Mild Wood”.

More recently, Laugharne was the prime location for the successful BBC Drama “Keeping Faith”. Some viewers of the programme might not be aware that the Carmarthenshire countryside and coastline have starring roles in the series. So, we asked Cath Ayres to tell us more about the town and the surrounding area. Cath is well placed to do this. Not only is she a Carmarthenshire girl, but she also played Faith’s friend Lisa Connors in the series. See below to find out what Cath told us.

As a child, Cath recalls visiting Laugharne every week for cello lessons. More recently, she remembers fondly, days spent in Laugharne whilst filming Keeping Faith. In between filming, the cast’s favourite watering hole was the famed Browns Hotel. Browns’ history dates back to1752, but during the 1940’s and 1950’s the pub became a favourite of Dylan Thomas. He spent so much time there, that he famously left the bar’s phone number as his own.

Today, Browns is a celebrated boutique hotel. The restaurant – Dexter’s at Browns – attracts diners from near and far. Dexter’s is named after the breed of cattle which makes up the hotels own herd which is reared on nearby Llywn Farm. Here the animals enjoy the lush Carmarthenshire pastures which make the meat so special. It’s all testament to the passion and skill put into preparation of the fayre at Dexter’s. This is a true farm to fork story.

Browns is one of many atmospheric pubs offering great food in Laugharne, today. It’s no surprise that the cast and crew of “Keeping Faith” sampled most of them. Honourable mentions go to The Three Mariners, Arthurs, The Ferryman and the Portreeve Tafarn.

In Laugharne, great food is not limited to the pubs. The Owl and the Pussycat Café has been offering homecooked food since 2000. At Poon’s Street Food you can enjoy traditional breakfasts in morning or wonderful Thai food in the evening – all served in an energetic and friendly atmosphere. And for something different, the local chippy, the Castle Fish Bar, offers cockles harvested from Carmarthen Bay. 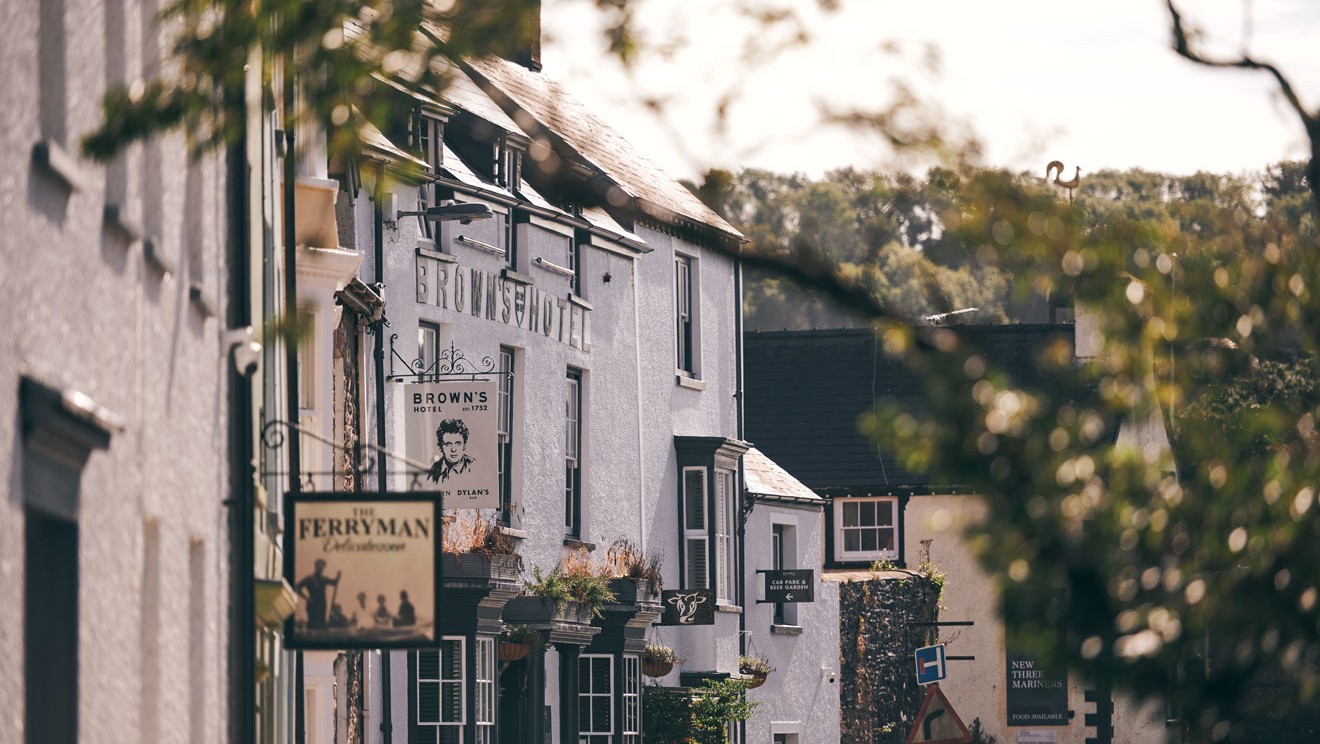 Room with a View

Traditional Welsh teas are also served at the Dylan Thomas Boathouse tearooms. For many it is the boathouse which draws them to the town. It was from here that Dylan departed for New York and his unfortunate death in 1953. It is little wonder that Dylan chose to live in the boathouse. It offers wonderful views across the Taf estuary – the “heron priested shore” - and no doubt provided lots of creative inspiration. A small shed, close to the main house, is where he went to write. Today the house is a museum and a tribute to one of Wales’ most famous literary talents. 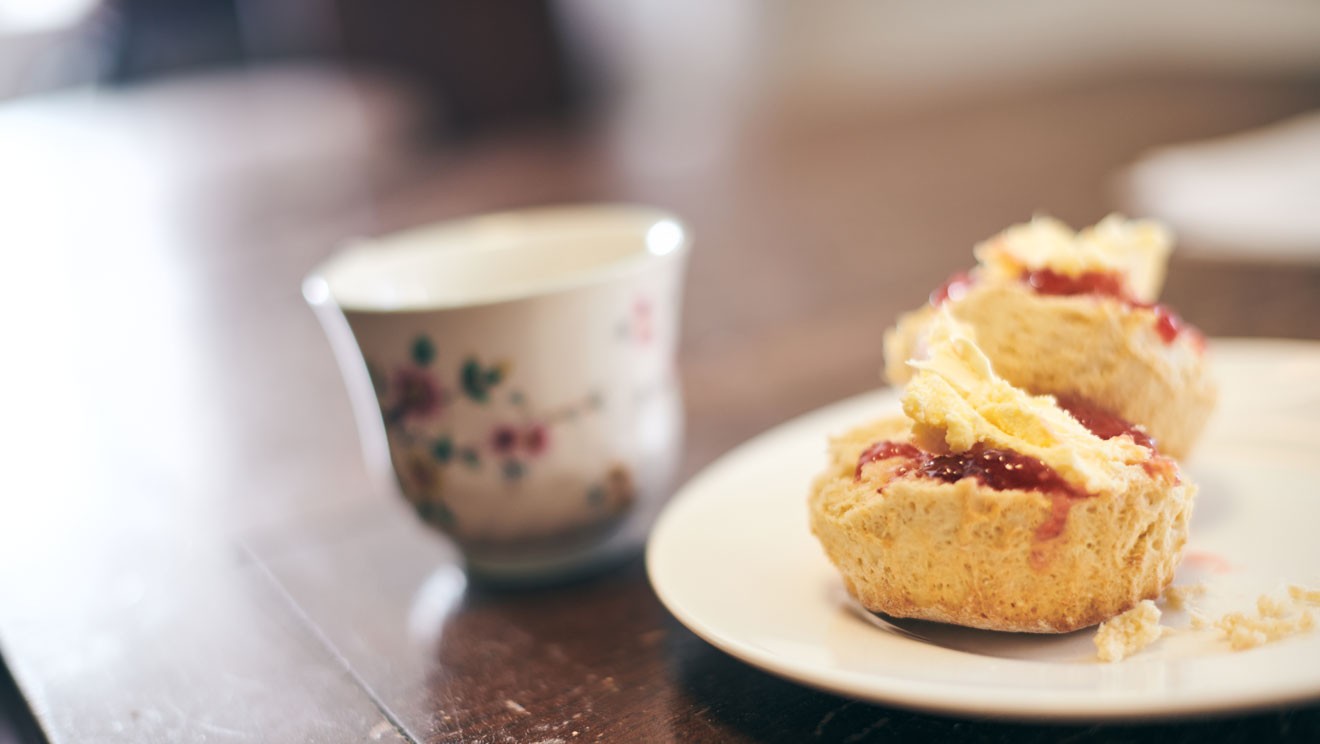 We asked Cath for best photo opportunity in Laugharne. It proved a difficult choice because of the array of vistas here, but she ultimately opted for the backdrop of Laugharne castle. It is impressive against the estuary and the birds wading on the water edge. Cath says it is particularly impressive at dawn. Unsurprisingly, such a beautiful location has provided inspiration for artists as well as instagramers. not least William Turner, whose watercolour of Laugharne Castle reveals a once turbulent sea in this usually peaceful setting. 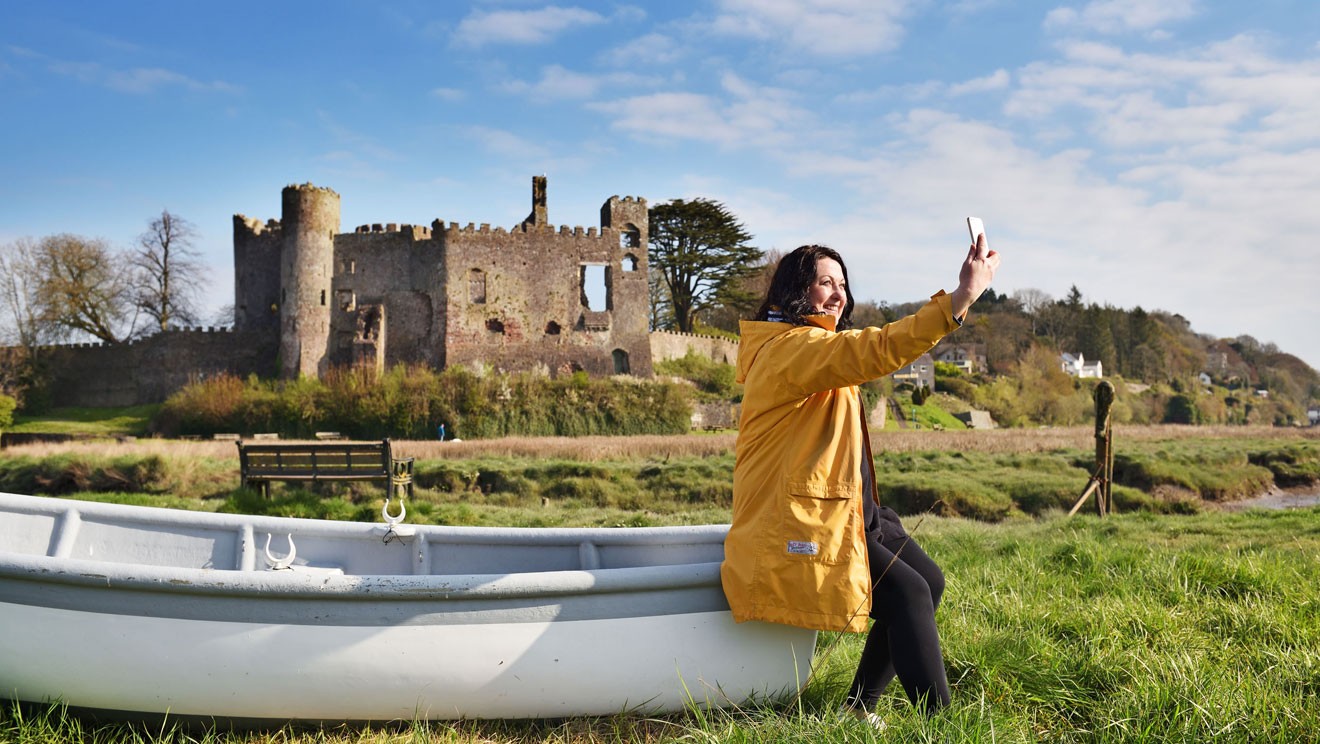 Walkers will be familiar with Laugharne because the Wales Coastal Path runs through the town. For visitors, Cath suggests that Dylan’s Birthday Walk, at roughly 3 miles, is the best walk as well as the best way to work up a thirst. In 1944, Dylan wrote 'Poem in October' about his birthday walk, to the shoulder of Sir John's hill. The beautiful poem is about his love of Laugharne and getting older.

In the centre of Laugharne is the Grist, marked by a Celtic Cross, where Methodist leader John Wesley is said to have preached to the townsfolk. The name reflects the fact that a former grist mill was located here. Choices is a quaint gift shop located here. It offers a variety of local crafts and Dylan Thomas memorabilia to remember your visit. 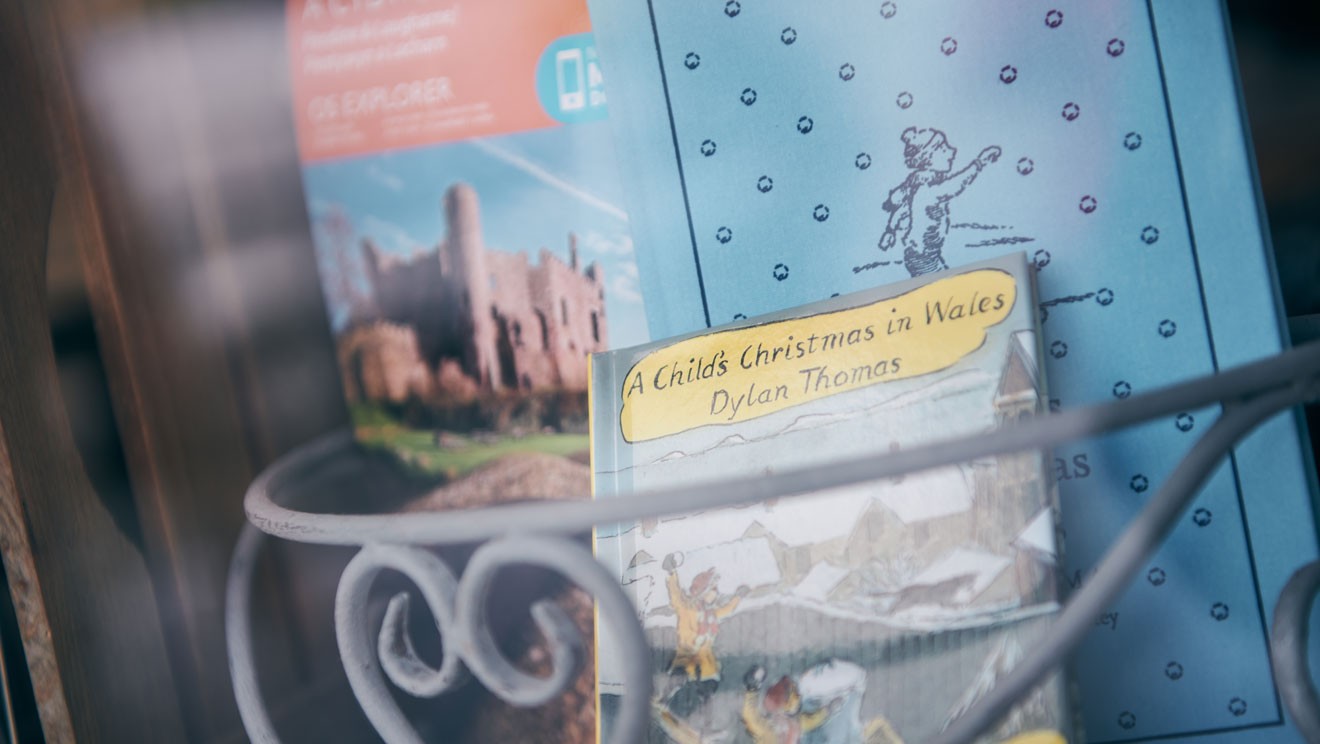 Cath believes that nowadays, Keeping Faith attracts almost as many visitors to Laugharne as Dylan Thomas. There’s even a superfan trail which links locations across the county. Among the most striking shots in the series are those overlooking the estuary Including in episode 1 when Cath’s character Lisa, is seen sharing a glass of wine with Faith. Rumour has it that fans of the programme make a b-line for house where this scene was shot, because they too want to drink some wine on the same veranda. Where it not for the fact that this is someone’s private home, perhaps this would have been Cath’s tip for the must have photo! 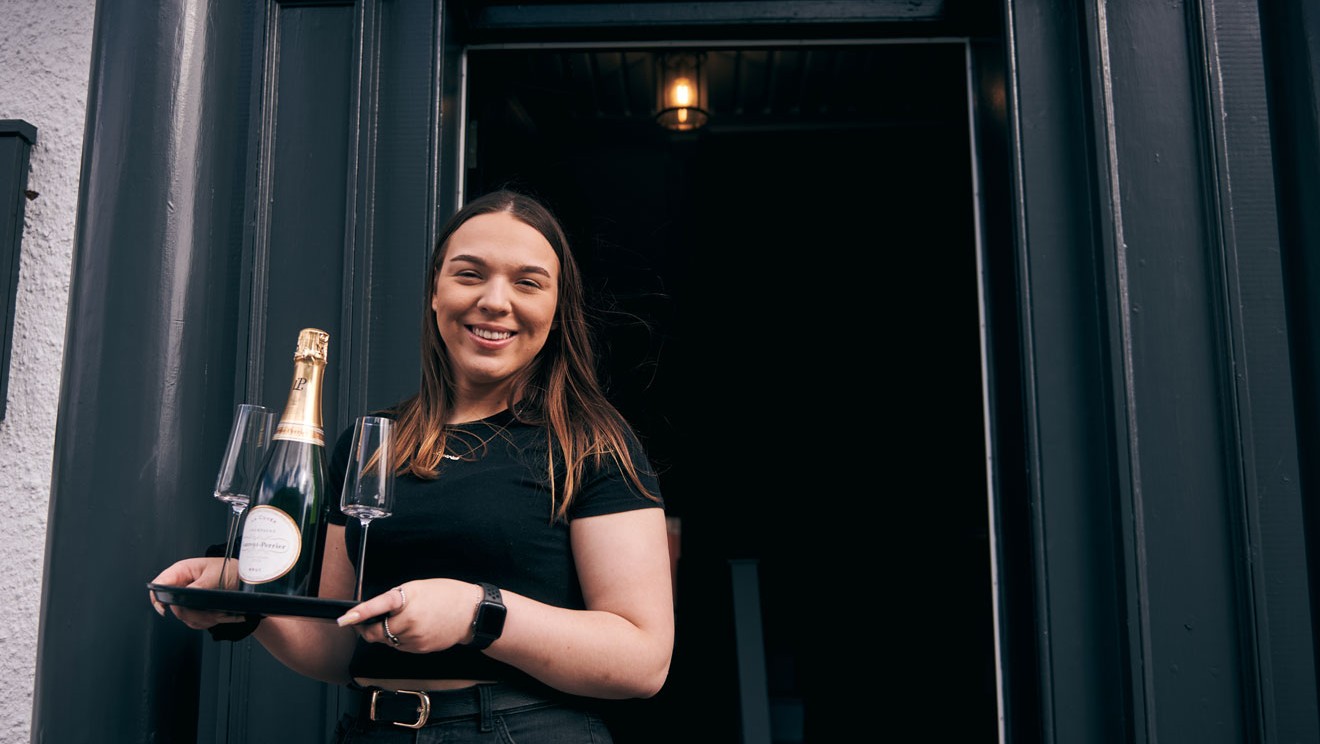 We asked Cath Ayres to tell us more about the town and the surrounding area. Cath is well placed to do this. Not only is she a Carmarthenshire girl, but she also played Faith’s friend Lisa Connors in the series.

The “Must Do” for Visitors – A visit to Dylan Thomas’ Boathouse.

The Photo Stop – A view of Laugharne Castle from the car park. Preferably at sunrise.

Her Personal Favourite – It has to be Browns Hotel.

The Refreshment Stop – Try a pub crawl, there’s plenty to choose from. 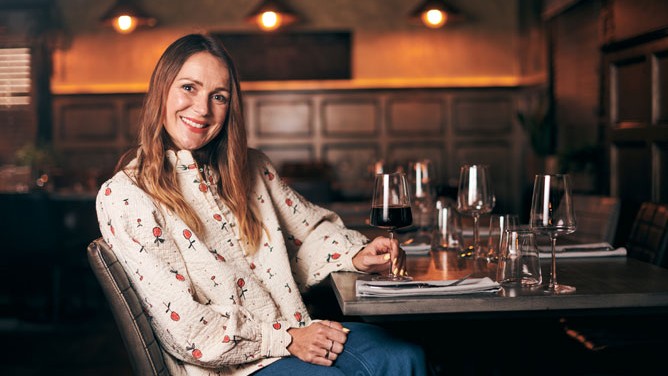