Tywi Valley tour of the castles

The Tywi Valley is one of the most spectacular river valleys in Wales, with castles dotted throughout its length.

Lower Tywi Valley – A stunning route following the route of the river from Carmarthen all the way to Llandovery with plenty of wildlife to spot.
Cothi Valley – A more secluded valley with steeper sides and quieter roads.
Brechfa climb – The longest continuous climb on the route, relatively gentle at 5% but almost 3 kilometres in distance making it a challenging climb.

Starting from Carmarthen’s County Hall where parking is available on weekends, cross the Tywi and negotiate the roundabouts to join the B4300, signposted Llangunnor. After less than 1km, turn left still on the B4300 towards Llanarthne.

Carmarthen is a town with impressive history and believed by many to be the first town in Wales and is often claimed to be the birthplace of Merlin, the magician from the Arthurian legends. Throughout the history the River Tywi has formed a vital role and continues to be the heart of the town and county. It is the longest river that flows entirely within Wales, from the source within the Cambrian Mountains to the estuary and the sea near Llansteffan.

Our ride traces the route of the river, from Carmarthen heading upstream, passing numerous castles and historical sites. From the town centre it does not take long to be out of the urban areas and onto quieter roads. After crossing the A40 and joining the B4300 the river is visible on your left with long, meandering bends clear to see. As well as being reasonably quiet, the road is also reasonably flat, making it great for a gentle warm up or an opportunity to enjoy an easier ride.

As the road passes through the village of Llanarthne, one of the county’s most notable sites is clear to see. Paxton’s Tower sits on top of the hillside and is a folly that was built to honour Lord Nelson in 1806. Llanarthne is also home to the famous Wright's Food Emporium and even though the ride has just began, the cycle-friendly stop will be a draw for many. From the village the road continues to trace the direction of the river, with the ruins of the 13C Dryslwyn Castle visible on a mound above the river and then soon after the more intact and spectacular Dinefwr Castle in the distance with an impressive cliff-top position with views across the entire valley. 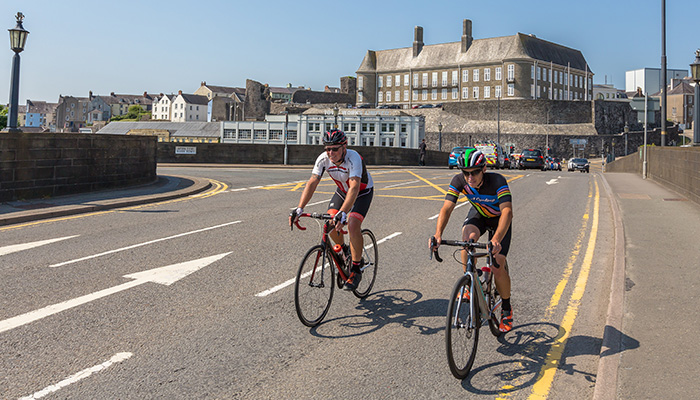 Continue for 20km, to a T-junction then turn left towards Ffairfach. Continue for 1km, then head across the mini-roundabout, towards Bethlehem. Continue on this road for 10km to Llangadog then follow the A4069 to Llandovery.

The route passes briefly through Ffairfach but soon onto even quieter single track roads. The terrain becomes a little more challenging, gaining height with fantastic views of the valley and river below. After 30km from the start comes the first challenging climb of the route, up the wall that is Bethlehem with gradients over 10% as the road gains height into the small village. A fast, twisting descent follows that heads into the village of Llangadog before another relatively gentle 12 kilometres to the town of Llandovery. At roughly half distance, the town could be a useful stopping point, with several cafes, including Penygawse where you will find one of the best coffees in the county. The town also boasts a castle that stands within the town centre car park and alongside it stands the impressive stainless steel statue of Llewelyn ap Gruffydd Fychan overlooking to landscape below.

Follow minor roads from the town through the villages of Siloh and Porthyrhyd before a short section on the A485 before turning left and downhill on a junction with no signposts. Head across the staggered crossroads to Llansawel. At the T-junction in the village, head up the hill before a left turn just before the chapel towards Abergorlech. Continue on this road, through Abergorlech, Brechfa and on to Nantgaredig.

As the route leaves Llandovery, the warm-up and flatter terrain comes to an end and we also head away from the River Tywi, heading up what is known as Henllys Hill to the village of Siloh where the elevation that has been so valiantly earned starts to give fantastic views of the surroundings and if you are lucky, the mountain of Bannau Sir Gar in the distance. Continuing to gain height through the tiny village of Porthyrhyd the route joins the A485 for a brief 2 kilometres before it turns left, plummeting down a sweeping descent and towards what is the heart of Carmarthenshire. Soon we cross the River Cothi, a river that will come back into view later. For the next 30 kilometres vehicles becomes sparse, the hillsides open up with beautiful green views all around. The village of Abergorlech is an idyllic spot, nestled on the Gorlech and Cothi rivers and a starting point for some of the very popular Brechfa Forest mountain bike trails. The Cothi Valley is one of the most picturesque areas in Carmarthenshire as the road winds its way alongside the river the terrain is undulating with a few cheeky climbs, but nothing that proves too taxing.

The small town of Brechfa is a mix of old and new and can be a useful stopping point, with a small community shop as well as the Forest Arms where coffees and larger meals are available and could suitably prepare you for the climb ahead. While it might not match Alpe d'Huez, the climb out of Brechfa is the longest on the route with a constant climb totalling 4 kilometres. The start is the steepest, up to 10% in places before levelling out and averaging just over 4%. If you manage to get up in under 10 minutes, that is some going and given this is the last long climb on the route, you can afford to push yourself a little harder. 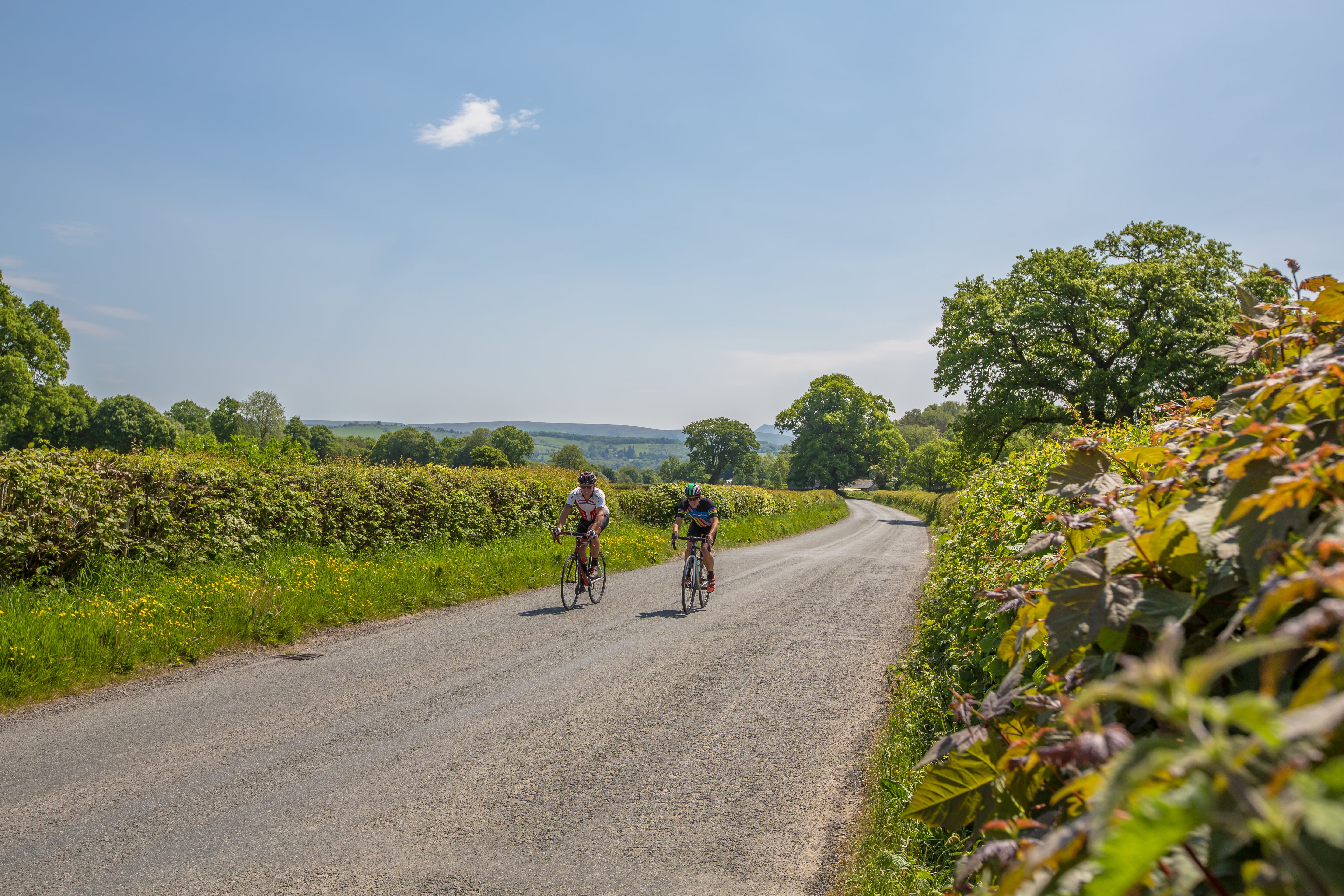 Straight across the busy A40 at the crossroads, follow for 2km crossing the town and back to the B4300. Turn right at the T-junction then follow all the way back to Carmarthen.

From the top, a gentle descent with some sweeping bends drops you back towards the Tywi Valley, navigating through the tiny villages of Felingwm Uchaf and Felingwm Isaf, whose names roughly translate to Upper (Uchaf) and Lower (Isaf) Valley of the Mill. The final downhill section takes you back to Nantgaredig and to a crossroads over the A40. Avoiding the busier road and taking the road through the town you will soon cross the Tywi on an old narrow bridge with cut away sections that can prove useful for cyclists as a place to stop and take in the view.

After crossing the river and one final short but sharp climb, the final section will retrace the early section in the reverse direction. Just 10 kilometres and being mostly flat, although heading West will usually feel harder than it should do against the prevailing wind. The town of Carmarthen will soon appear through the hedge-lined roads with the imposing sight of County Hall. Perched above and overlooking the river, it was previously a prison and built on the site of Carmarthen Castle, where the ruins are still possible to see and finally becoming the building that we see today in the 1950s. 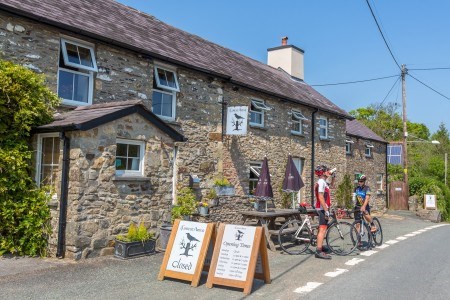