In the late 11th century, the Normans established many earth and timber castles in South Wales, thus gaining a toe-hold on new lands. Laugharne – then Abercorran – was no exception. A small defended town was established and settlers brought in, mostly men from the west country, who followed different laws and customs and ways of farming – a typical ‘Marcher Lordship’. The area, or ‘Welshry’, remained settled by the Welsh, but the core of the Lordship were English settlers.

In 1247 the de Brian family, who had large holdings in Devon, were granted the Lordship of ‘Talachar’ by the King and dominated the town throughout the Middle Ages. They granted the Townsfolk special privileges in their famous Charter, in order to keep their loyalty during attacks from the Welsh. It is this division and duality which gives Laugharne its very special character and traditions. Laugharne’s famous ‘Common Walk’ is held every three years on Whit Monday. This ‘beating the bounds’ ceremony is over 20 miles long, led by the Portreeve and Aldermen of the Corporation. Many of the places mentioned in the Charter of 1291 granted by Sir Guy de Brian are retraced.

Laugharne has been a source of inspiration to poets and artists for a long time – not least William Turner, whose watercolour of Laugharne Castle shows a rough sea over the Grist with people salvaging wreckage. So Dylan Thomas is but part of a long tradition... 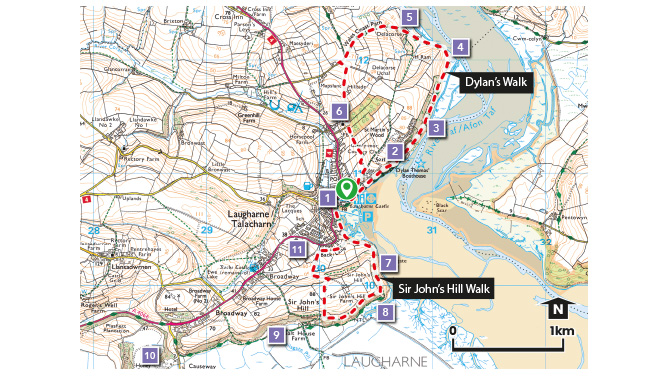 Why Walk?
There are information panels at viewpoints points along the way and sections of both walks follow the Wales Coast Path which provides breath-taking views across the bay. Both walks have strong associations with Dylan Thomas.

How Hard?
Dylan’s Walk to the north east is over relatively level ground for most of the way. The route is surfaced as far as Dylan Thomas’s writing shed and Boat House. Further along there are fields and short uphill sections on rough farm tracks.
Sir John’s Hill walk is hillier in nature, with a short flight of steps, grassy tracks, fields to cross and a short section of country lane.

1. Laugharne Castle - first established in 1116 but the towering walls date to the 15th and 16th centuries as a fortified country house. The salt marshes have developed in area over the last 100 years or so – in the Middle Ages, boats could come right up to the castle walls.

3. Cliffside Path until the 1950s, an open boat from Ferry Point to Laugharne was operated on the tide by a single boatman.

4. Ferries and River Crossings - Ferries crossing the Taf Estuary since the Middle Ages have been used by kings, bishops, pilgrims, merchants and many others. 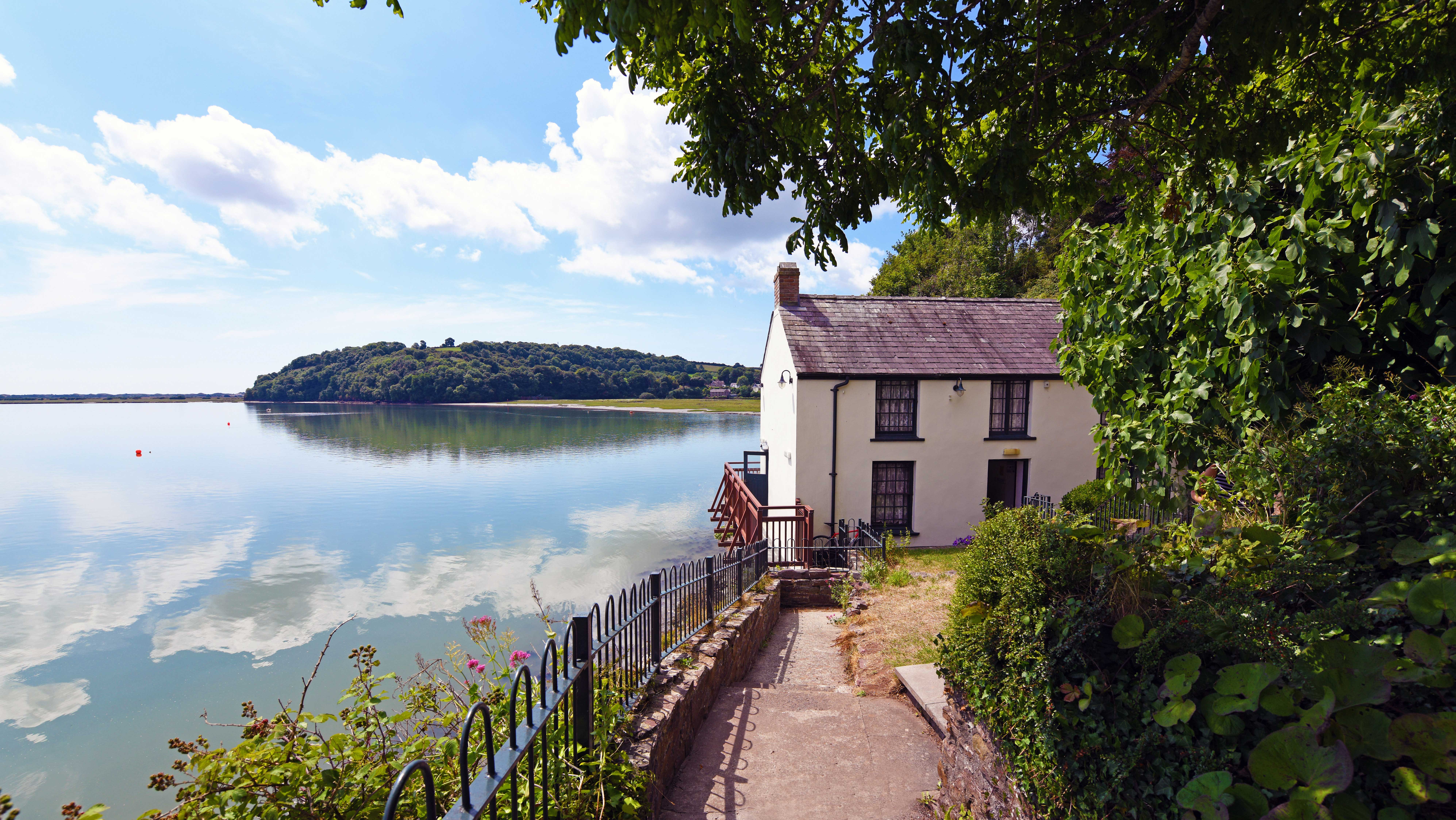 7. Coporation Boundary - At the stile, look for the inscription on the rock. Excellent views back along the Taf estuary and seaward to the National Trust’s Wharley Point, Cover Cliff and Black Scar Ferry.

8. Laugharne Marsh - Land reclaimed from the sea since the Middle Ages. Out towards Ginst Point you can see ‘The Freething’ and ‘The Saltings’ sea walls. Late 18th century ploughing in regular ridges can still be very clearly seen today.

9. The Lees - Low-lying common land (40 small strips or shares) belonging to the Corporation of Laugharne, first granted by Sir Guy de Brian in 1291 and with cast-iron pillars marking the bounds.

10. Coygan Quarry - Seen at a distance, an outcrop of carboniferous limestone with an extensive cave system. Some 38,000 years ago the cave was a Hyena den. Crude stone hand tools used by Neanderthal men were also found in the cave.

11. Back Lane - According to Mary Curtis, there was much slaughter along this part of the route when the Castle was stormed by Cromwell’s soldiers. 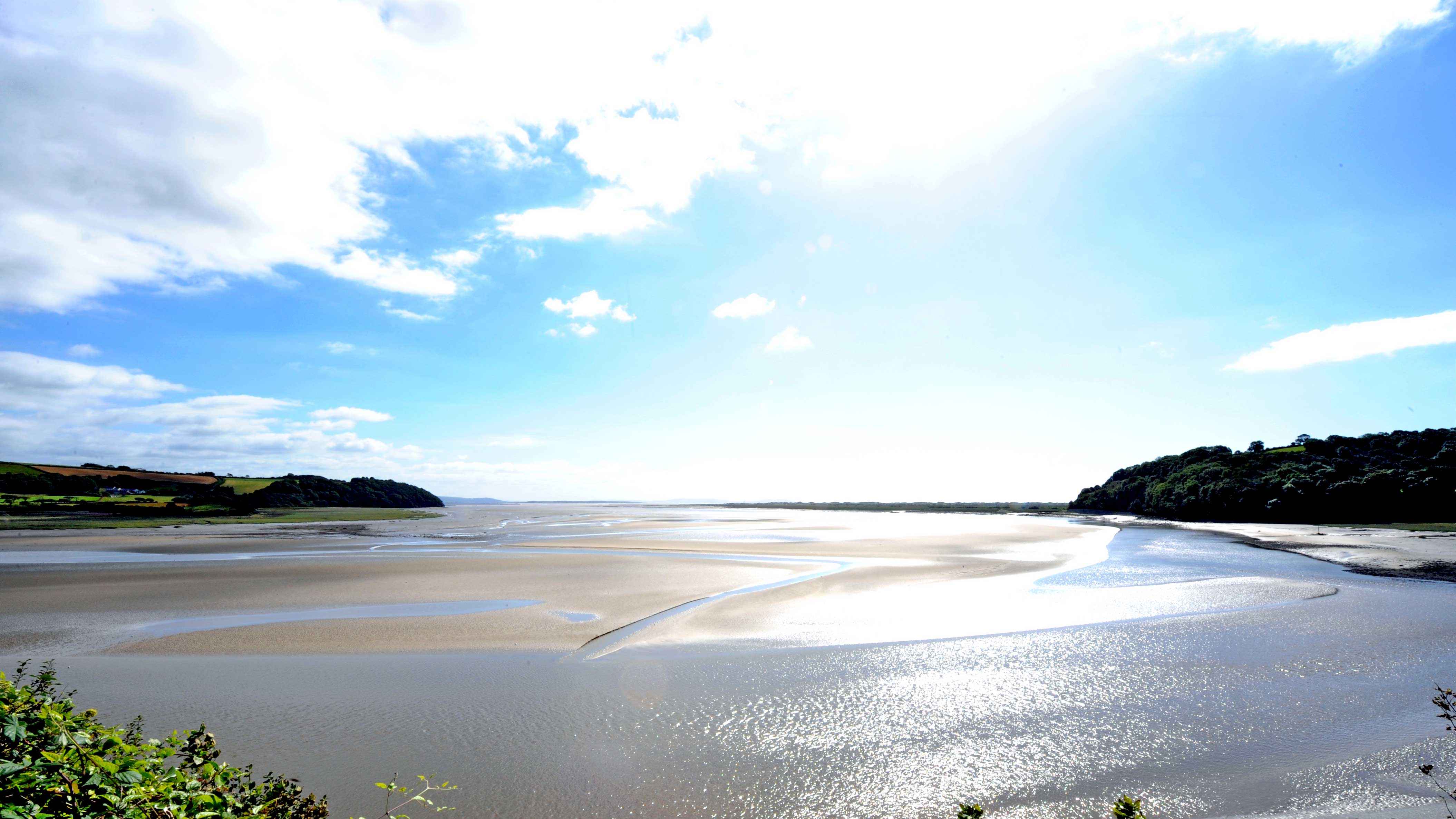