Continue north, heading directly across the crossroads towards Llanwinio and follow for 3km. Turn right, signposted Cwmcych. Immediately after the turn you will see the sign “Clydau”. Shortly after reach a crossroads, heading straight across and follow for just over 1km (23km route distance). Turn right immediately after a white house, signposted Carmarthen. Follow the B4299 for 7km, then turn right on a sharp left hand bend signposted Blaenycoed.

Follow the minor road for 9km until it reaches a t-junction. Turn right, follow towards Carmarthen. Follow into Carmarthen town, reaching traffic lights at the 47km point. Turn right, follow for a 200 metres and straight across a roundabout. Follow past the monument and down to the traffic lights. Turn left, continue across the dual-carriageway and towards Llansteffan on the B4312.

Continue to Llansteffan (60km), continuing on the B4312 to Llanybri. Within the village as the road descends, turn left signposted St Clears and follow to the point it reaches the dual-carriage (71km). At this point, follow Sustrans Route 4 (blue cycle route signs) to avoid riding on the A40 dual-carriageway. Continue until just after a very short unsurfaced section at which point turn left within St Clears. Turn left and follow the road to Laugharne (79km) and continue on to Pendine (87km). Continue up the hill out of Pendine to Red Roses. At the crossroads head straight across, follow for 2km to the village of Tavernspite. As you enter the village take the second right turn, towards Whitland and follow back to the start point. 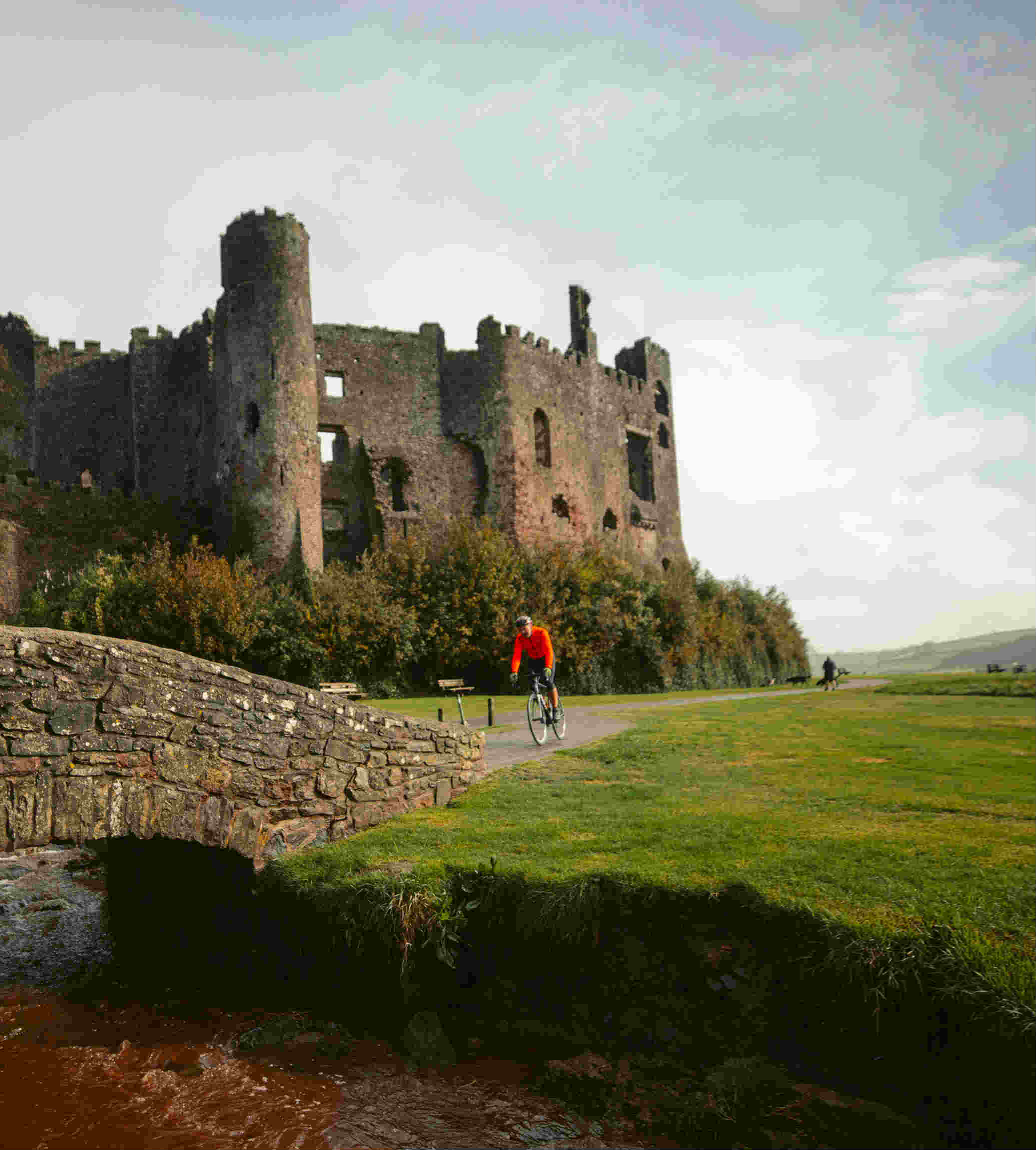 Whitland is a town with history that dates back to the beginning of Wales and regarded as one of the meeting places for the first parliament in the year 930. It sits on the western edge of Carmarthenshire and is in a great location for riding with hills all around the beautiful Carmarthenshire coastline not far away. The surrounding area is a key area for agriculture and with green rolling hills all around and quiet roads it also lends itself perfectly to cycling. The A40 trunk road, which now bypasses the town forms arterial route for a large amount of road traffic, which takes the load off the smaller roads.

Our route starts in the centre of the town and heads North, passing over the busy A40 and immediately onto quiet and scenic roads. After a gentle climb out to warm up the legs we fly downhill, although care is needed at the bottom as it is very easy to miss a left turn needed towards.

Henllan Amgoed. As we continue North the road dips up and down a bit, although overall is a long and very gradual climb. With good weather the Preseli hills are visible at times in the distance and as the elevation increases the views get even better with sea views if you look south, giving a taste of what lies ahead in the route.

From the 10km point the road starts to dip and roll more, with short but enjoyable descents and generally being an easier ride. Shortly after 20km the route turns right, at which point it passes the highest point and while it is only 250m elevation the views from this point are worth stopping to enjoy.

With clear skies and sea views across to the Gower to the south and the Preseli mountains feeling very close to the North. It also marks the most northerly point of the route as we now head towards Carmarthen. Almost 30 kilometres of winding, quiet country roads and even on a busy summer season day the roads should feel almost empty and a big part of what makes this area so enjoyable to ride.

Carmarthen passes at around 50km distance and we skirt the centre on what will almost certainly be the busiest section of the route before heading towards Llansteffan. Now following the coastal road there are a few pitches to expect, although the tougher ones are still to come. Llansteffan is a beautiful spot and not as well known as other beach locations in Wales, which is perhaps what makes it so special. While the route misses the sea front and the castle is hidden, it is a place worth either stopping to wander around or returning to enjoy in full.

The climb out and the route to St Clears that follows can be tough as although the elevation never rises more than 125 metres, it feels like a roller coaster with short and at times very sharp inclines that test the body and especially so far into the ride. The road stops where it meets the A40 dual-carriageway and while it is possible to ride the main road, there is a better alternative as we link onto Sustrans Route 4, following a well surfaced and signed route for around 3km, skirting around the town of St Clears and also missing all the traffic.

Continuing to follow the coastline we reach Laugharne, known for being the final home of Dylan Thomas, where his boathouse which is now a museum is a popular attraction and the place that he wrote many of his most famous pieces. It is also the site of a Castle that remains prominent and in a commanding position overlooking the Taf Estuary.

Leaving Laugharne towards the flats of Pendine it is worth hoping for a calm wind as with a strong Westerly or prevailing South Westerly this stretch although short can be tough. With a tailwind or calm wind it will fly by however and before you know it will be in Pendine. The town has speed at its heart, where the big tidal range, 7 mile long hard sandy beach made it the location for many a speed record attempt.

First used by Malcolm Campbell in 1924, reaching 146.16mph, a new World Record at the time in the famous Blue Bird. Later attempts from J.G Parry Thomas in his car “Babs” who unfortunately died during an attempt and Campbell returning the record was pushed up to 174.22mph before the record attempts were forced to go elsewhere due to the speeds being reached meaning the beach was then too short. In recent years there has been more speed based records and festivals held on the beach and it is the location for the Museum of Speed, where the famous “Babs” is on display.

As for the route, as you leave Pendine a speed record will not be high on your mind as the road pitches uphill and what is almost certainly the toughest climb and made even more challenging with tired legs. The steepest pitch is early on, the first kilometre being almost 15% average but while the gradient does ease off the full climb is 3km at still a challenge at 6%. If you can manage it, then the views back and to the site of the coast as you near the top are stunning and from the top a big sigh of relief as the final 10km are easy with the road passing through Red Roses and to Tavernspite before the final downhill stretch back to Whitland.

Overall it is a route that will challenge, but a route that shows the many different sides to Carmarthenshire from the green fields and farmland, fantastic views and the fantastic coast with a few hidden and less known treasures to enjoy along the way.

Pendine Hill – The beach may be flat and known for fast racing, but the hill is a big challenge