A wild route with challenging climbs, plenty of quiet single track roads and fantastic castles to view along the way.

Follow downhill and until you reach a staggered crossroads. Go straight across (left, immediate right) signposted Llansawel. Follow to the village of Llansawel, arriving in the centre at a T-junction turn right up a short hill and then turn left before the chapel, signposted Abergorlech. Continue along the B4310 through Abergorlech and Brechfa villages and to Nantgaredig.

Arrive at a crossroads, heading straight over the A40 and through the village. Cross the Towy over a stone bridge and up a short hill to a T-junction. Turn right and follow for 7km, then turn right signposted Maesybont onto the B4297. Continue over the mountain, through Maesybont village and heading towards a large mast throughout. 1Km after Maesybont village turn left onto a minor road (unsigned), then turn right almost immediately after (unsigned). After 1km arrive at a junction and head across the junction signposted Llandybie. Follow through Pentregwenlais and arrive at a T-junction on the outskirts of Llandybie. 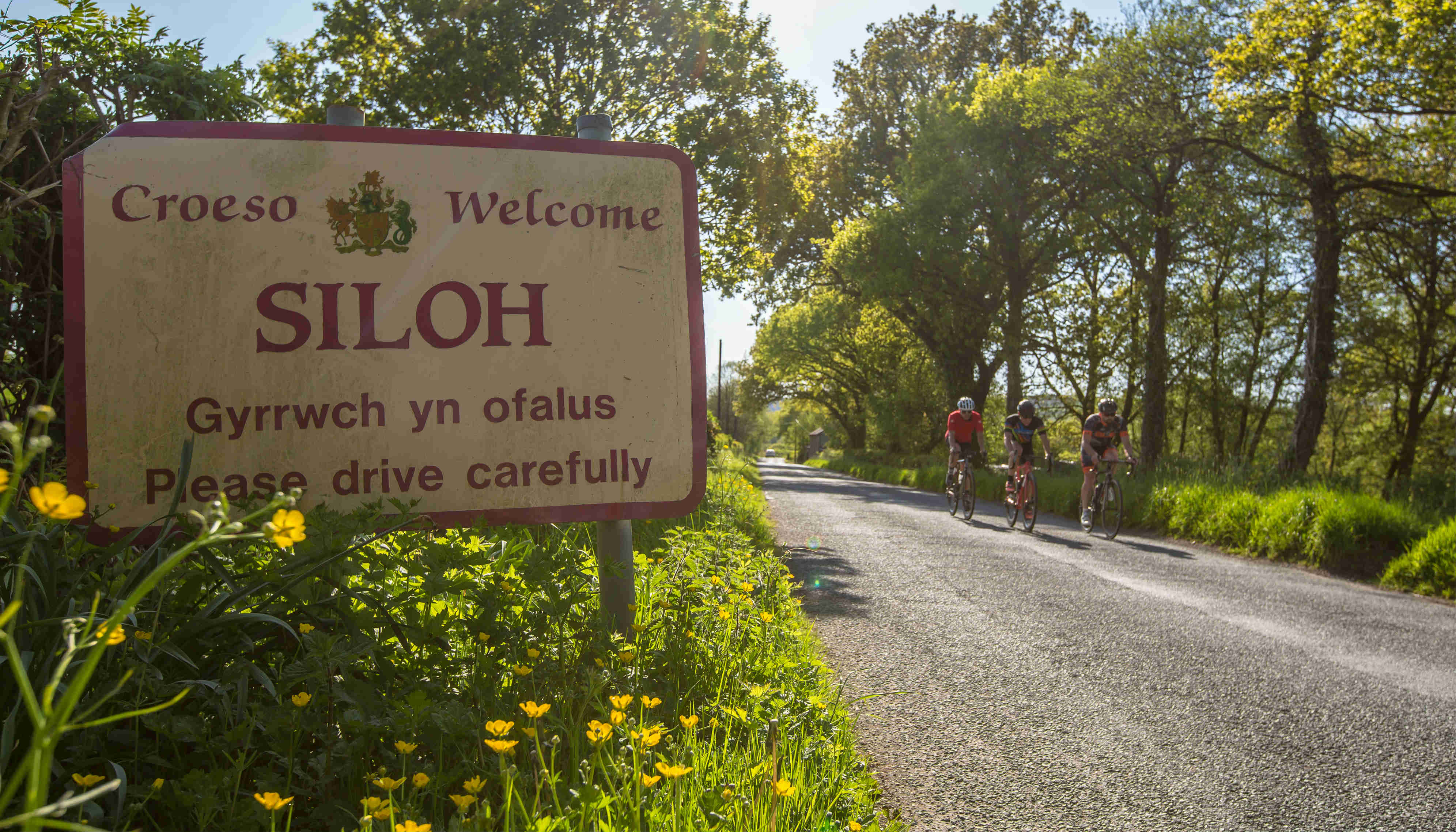 Within a rural area many of the cycling routes from Llandovery are incredibly simple to follow with some of the Discover Carmarthenshire routes having just 3 or 4 turning points within a big distance and while there is something great about such simplicity with modern technology being so advanced and there being endless roads to ride some routes require a little extra guidance, with the longer Tywi & Cothi route being one. With many computers now having turn-by-turn navigation and GPX file routing, this route is a perfect one for testing those as there is a little more navigation needed to find some of the more hidden roads than cross the county.

The route is also a challenging one with plenty of significant climbs and the first starts just a few kilometres after leaving the town, up what is known localled as Henllys, named after a manor house near the bottom. Climbing to the village of Siloh it gives a good warm up for the remainder of the ride. The road continues to gain height passing through Porthyrhyd and one final drag to the end of the start of the first real descent as the road drops off the A482.

A calmer section follows to Llansawel and then towards the village of Abergorlech where the route starts to follow the Cothi river downstream. The area around Abergorlech and up to Brechfa is popular with cyclists who enjoy mountain biking as within Brechfa forest there are numerous routes for all abilities. The road cycling through the valley is good too with good views and a quiet road to enjoy. From Brechfa the climbing begins again with a long but fairly steady climb out of the valley, where the road moves away from following the path of the Cothi.

The descent to Nantgaredig is fast and has plenty of swooping bends to enjoy as it passes through the villages of Felingwm Isaf and Uchaf, the Welsh words for Upper and Lower. Crossing straight over the A40 at Nantgaredig the route heads across a lovely stone bridge over the River Towy and on to join the quieter back from between Llandeilo and Carmarthen, a popular and relatively flat ride that locals often ride. The route follows the path of the Tywi upstream for a short time, passing the point where the rivers Cothi and Tyi merge and through the village of Llanarthne. Up above the town is a tower known as Paxton's Tower and is visible from many places around the county. It is a folly, built by Sir William Paxton around 1805 and in honour of Lord Nelson. Paxton was the owner of Middletone hall, a nearby estate that is now home to the National Botanic Gardens of Wales, a fantastic attraction to visit with activities for the whole family.

After passing through Llanarthne the road soon turns off, heading up Maesybont hill. In total it is a long climb over 5km in distance but the toughest section is within the first 2km and after that it climbs in a series of tiers up to the highest point at around 250m elevation. The route then heads onto smaller lanes, towards Llandybie before climbing again and heading towards the village of Trap. The village is right on the Western edge of the Brecon Beacons National Park and after passing through the village the next treasure of the route will soon come into view.

Carreg Cennen Castle is hidden away and while it may not be as busy an attraction as some other castles it is arguably the most visually stunning castle in Wales due to its position. Translated it means Castle (on the) Rock, a name that will make sense when you see it. Built on a rocky outcrop with steep cliffs it means there is only access from one direction, which would have made defending it easier, in theory. Remains have been found dating to prehistoric times, but the first masonry castle was build in the year 1197 and stood until the War of the Roses when it was destroyed in 1462. A fascinating castle to visit there are numerous caves hidden beneath that were believed to have been used when under attack.

The road that passes the Castle then heads through the village of Gwynfe, which stands high and within the Brecon Beacons giving fantastic views of the surrounding hills, including the Black Mountain and Bannau Sir Gar. Being so high means there is a long descent to follow and onward to Llangadog before the final 10km of flat and relatively easy riding back to Llandovery to finish.

Maesybont – A long, challenging climb out of the Towy valley

Maesybont – A long, challenging climb out of the Towy valley